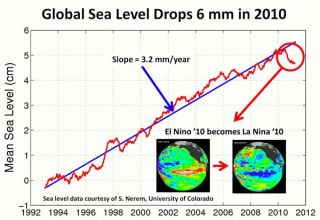 The red line in this image shows the long-term increase in global sea level since satellite altimeters began measuring it in the early 1990s. Since then, sea level has risen by a little more than an inch each decade, or about 3 millimeters per year. While most years have recorded a rise in global sea level, the recent drop of nearly a quarter of an inch, or half a centimeter, is attributable to the switch from El Ni

Earth's seas have been rising gradually with the influence of climate change, but over the past year, this rise hit something of a pothole, with a temporary dip linked to the El Niño-La Niña cycle and all the rains that have poured onto the planet's continents.

For the past 18 years, the U.S./French Jason-1, Jason-2 and Topex/Poseidon spacecraft have been monitoring the gradual rise of the world's oceans in response to global warming. This rise is caused both by the expansion of the ocean's waters as they warm up, and by the melting of glaciers and ice sheets.

Most of the time, this rise is a steady one, but between last summer and this one, global sea level actually fell by about a quarter of an inch (about half a centimeter).