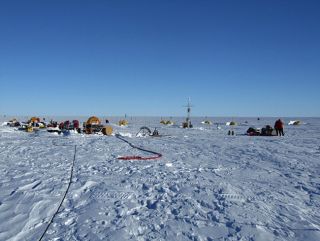 A two-month-long expedition to one of the most remote sites on the planet — the sprawling Pine Island Glacier in Antarctica — has revealed that currents of warm water beneath the glacier are melting the ice at a staggering rate of about 2.4 inches (6 centimeters) per day.

An international team of researchers journeyed to the southernmost continent to study the Pine Island Glacier, which is the longest and fastest-changing glacier on the West Antarctic Ice Sheet. This region, in the far reaches of Antarctica, has been of particular interest to scientists because it is among the most rapidly melting ice masses in the world, thinning as it flows to the Amundsen Sea at a rate of about 2.5 miles (4 kilometers) each year.

Since warm seawater flows beneath the ice shelf (the part of the glacier that floats on the ocean), scientists have known that the Pine Island Glacier was melting from below. Now, using sensors deployed across the 31-mile-long (50-km-long) glacier, the researchers have gauged the rate of glacial melt beneath the solid ice. [Album: Stunning Photos of Antarctic Ice]

The results demonstrate the crucial need to better understand melting processes underneath massive glaciers, including how this undersea process will affect global sea-level rise in the future.

"Intensive melting under the Pine Island ice shelf, as observed in our study, could potentially lead to the speed up and ultimate break-up of the ice shelf," David Holland, a professor of mathematics at the Center for Atmosphere Ocean Science at New York University, said in a statement. "That's important, as this ice shelf is currently holding back inland ice, and without that restraining force, the Pine Island catchment basin could further contribute to global sea-level rise."

The Pine Island Glacier currently acts as a plug that holds back the immense West Antarctic Ice Sheet, whose melting ice contributes to rising sea levels. If the glacier's seaward flow speeds up, there could be global consequences.

As glaciers melt, the water flows down slopes and empties into the ocean, causing sea levels to rise. Warming oceans also cause sea levels to go up, because water expands as its temperature increases. Still, understanding precisely why these changes are occurring, and how much sea levels are projected to rise in the future, is tricky, researchers have said.

Last November, a study published in the journal Science estimated that ice lost from the entire Antarctic ice sheet and Greenland ice sheet is responsible for a fifth of the 2.2 inches (5.59 cm) of sea-level rise observed since 1992.

To see how much the Pine Island Glacier was melting, Holland and his colleagues installed sensors inside holes drilled 1,640 feet (500 m) through the solid ice, at various points across the glacier. The instruments measured ocean temperatures, salinity (or salt content), and the movement of warm-water currents that carve channels through the ice shelf and flow underneath it.

The data, published online today (Sept. 12) in the journal Science, will help scientists piece together how the Pine Island Glacier is changing, and will help them build more accurate models of glacier melt.

"What we have brought to the table are detailed measurements of the melt rates that will allow simple physical models of the melting processes to be plugged into computer models of the coupled ocean/glacier system," Tim Stanton, a research professor at the Naval Postgraduate School, said in a statement. "These improved models are critical to our ability to predict future changes in the ice shelf, and glacier-melt rates of the potentially unstable Western Antarctic Ice Sheet in response to changing ocean forces."