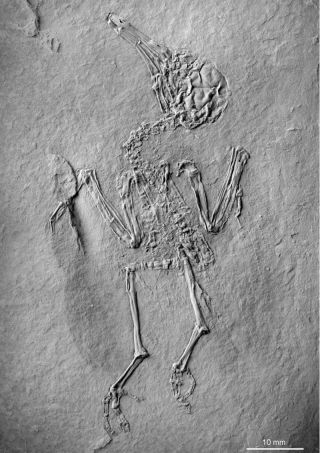 Birds have been visiting and pollinating flowers for at least 47 million years, fossil evidence now suggests. The new find pushes back the onset of ornithophily, or bird pollination, by about 17 million years, researchers say.

To pollinate, most species of angiosperms (flowering plants) require assistance from animals, particularly insects and birds. Though research suggests that insects have been pollinating flowers since the early Cretaceous period, over 100 million years ago, the onset of ornithophily has long remained elusive. Previously, fossils of modern-type hummingbirds suggested ornithophily began as early as 30 million years ago, but this conclusion was only inferred indirectly from the birds' long beaks and presumed hovering capabilities.

However, researchers have now analyzed a well-preserved, 47-million-year-old fossil of the extinct bird Pumiliornis tessellatus, and found that the animal's stomach contents contain numerous angiosperm pollen grains. The discovery is the first direct fossil evidence of flower visitation by birds, and suggests that ornithophily is far older than previously believed. [See Beautiful Images of the World's Hummingbirds]

"We don't just have a fossil that can tell us about the birds. We have a unique sign that tells us about the special ecosystem it lived in," said study lead author Gerald Mayr, an ornithologist at the Senckenberg Research Institute in Frankfurt, Germany. "There's a bigger story that this single skeleton can tell."

Scientists from the institute originally found the skeleton in 2012 in Germany's Messel Pit, an oil shale pit known for its rich fossil collection, which includes mating turtlesand very early primates. The new fossil is one of just three specimens of P. tessellatus, an extinct bird whose family tree is unresolved (experts believe the birds may be related to cuckoos or parrots).

The fossil is a complete skeleton with a lot of preserved soft tissues, including plumage and claw sheaths. In the bird's stomach, Mayr and his colleague, paleobotanist Volker Wilde, discovered hundreds of pollen grains of different sizes, some of which were clumped together. The pollen doesn't appear to match any fossil or extant pollen the researchers are familiar with. "We're not sure what exactly it is," Mayr told Live Science, adding that the pollen species hasn't been found in the Messel Pit before.

The bird's stomach also contained unidentifiable insect remains. Though insects also ingest pollen grains, the researchers believe there are not enough insect remains in the bird's stomach for the pollen to have come from the insects' intestinal tracts. What's more, the large size of some of the grains and their clumping suggest that the bird directly ingested the pollen from flowers, likely while hunting for nectar.

The scientists also analyzed the morphology, or physical characteristics, of the fossilized P. tessellatus. The bird had a long, slender beak with elongated nasal openings, an adaptation that increases the flexibility of the beak tip — this feature is also seen in hummingbirds, which feed off the nectar located deep in flowers. It also had a fourth toe that could be turned backward, a morphology that may have allowed the bird to clasp or climb branches, helping it visit flowers.

The results suggest that flowering plants able to take advantage of bird pollination likely existed before 47 million years ago, Mayr said. What's more, because the fossil predates any extant nectarivorous bird groups, or those that feed on a flower's nectar, the find suggests that plants likely evolved the morphology for ornithophily before modern nectarivorous birds evolved.

"When you read about the flower-bird interaction, you always read that the bird-pollinated plants coevolved with modern birds," Mayr said. "But it's actually much more complex than that."

The research was detailed online May 28 in the journal Biology Letters.