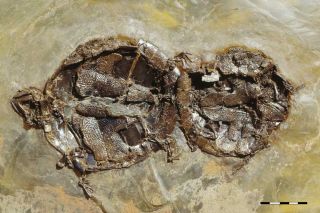 One of nine mating pairs of the extinct turtle Allaeochelys crassesculpta found at the Messel Pit fossil site in Germany. The male (to the right) is about 20 percent smaller than the female.
(Image: © Naturmuseum Senckenberg in Frankfurt)

Fossil turtles have been caught having sex, the first known case of animals with backbones found copulating in the fossil record, researchers say.

The mating turtles may have been caught in a death trap as they sank to deeper layers of the lake, where they were having sex nearly 50 million years ago, the researchers speculate. The lake's deep layers may have held deadly volcanic gases or other toxins.

Scientists made their discovery at the Messel Pit in Germany, which once was a deep volcanic crater lake in a wet, tropical environment. The pit was a quarry originally mined for the oil in the shale there; but over the years, it has become the richest site in the world for understanding the living environment of the Eocene, the epoch between 57 million and 36 million years ago when mammals began conquering the planet. Animals there included early horses, reptiles, primates, honeybees, giant ants and countless birds and bats.

Caught in the act

Researchers focused on 47-million-year-old specimens of an extinct turtle (Allaeochelys crassesculpta) found at the pit. These were rather small turtles, about 20 centimeters (8 inches) long. "They would have looked very similar to their closest living relative, the pig-nosed turtle (Carettochelys insculpta) from New Guinea and Australia, just much smaller," said lead researcher Walter Joyce, a fossil turtle expert at the University of Tübingen in Germany. [See Photos of Mating Turtle Fossils]

"The turtles likely ate anything they found swimming near the surface of the lake — mostly insects, small crustaceans and fruit," Joyce added. "We do not have any evidence of predation of adult turtles, but it is likely that they had to look out for the crocodilians that lived in the same lake."

Past analysis suggested this ancient species and its vanished kin lost almost all the scales on their bodies. Like their closest living relatives, these extinct turtles may have been able to absorb oxygen from the water through their skin, helping them remain submerged for prolonged amounts of time.

Intriguingly, a number of these fossil turtles were found in pairs. Now Joyce and his colleagues found these reptiles were apparently couples that perished while having sex in a deadly abyss.

"We are finding animals that died while mating," Joyce told LiveScience.

The researchers analyzed nine pairs of the turtles. Each pair was apparently made up of a male and a female — the females are slightly larger than males, have shorter tails and apparently had a hinged lower shell that may have helped them lay large eggs.

In addition, the turtles in each pair always had their rear ends oriented toward one another. Finally, in two of the pairs, "the tails of the partners are aligned with each other," Joyce said. "This is the very position in which the tails are held when living turtles mate. This observation is the true smoking gun."

"No other vertebrates have ever been found like these, so these are truly exceptional fossils," Joyce said. "The chances of both partners dying while mating are extremely low, and the chances of both partners being preserved as fossils afterward even lower. These fossils show that the fossil record has the potential to document even the most unlikely event if the conditions are right."

The very fact that so many turtles died while mating at Messel Lake suggests something odd was going on there. Joyce and his colleagues suggest the permeable skin that may have helped these turtles breathe underwater may have accidentally doomed them.

Today, turtles often begin the sex act in open waters, sinking during copulation. The researchers suggest that while the upper layers of Messel Lake were hospitable enough to allow turtles to live, its deeper layers may have been a toxic death trap, perhaps from the buildup of volcanic gases or poisonous decaying organic matter. Such an embrace would have proved lethal for many turtle couples at this lake, Joyce said.

Joyce and his colleagues detailed their findings online June 20 in the journal Biology Letters.