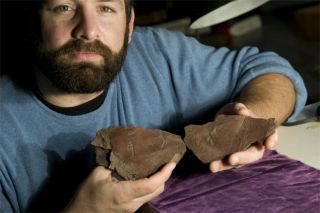 Scientists have uncovered what they are calling the oldest full-body impression of a flying insect, possibly an ancient mayfly.

"[The fossil] captures a moment in time over 300 million years ago when a flying insect just happened to land on a damp, muddy surface leaving almost a perfect impression of its body behind," said researcher Jake Benner, a paleontologist at Tufts University in Massachusetts.

Benner and Tufts geologist Richard Knecht discovered the insect imprint in a shale and sandstone outcropping hidden in a wooded field behind a strip mall in North Attleboro, Mass. Knecht had learned of the site while reading a master's thesis written in 1929.

With a length of about three inches (eight centimeters), the 310 million-year-old impression did not include wings. But Knecht and Benner said the insect's body structure was similar to that of primitive flying insects. In addition, "there are no walking tracks leading up to the body impression, indicating that it came from above," Benner said.

The insect may have been a mayfly.

"We can tell from the imprint that it has a very squat position when it lands," said researcher Michael Engel, an entomologist at the University of Kansas. "Its legs are sprawled and its belly is pressed down. The only group that does that today is the mayfly."

The specimen will help scientists figure out how the insect moved once it landed on a surface, as well as its stance, the position of its legs and details about its body structure. Typically, scientists have only the remains of wings for their study of insect anatomy.

The insect imprint also could provide clues about the ecosystem during the Carboniferous Period, which extended from 354 million to 290 million years ago. The researchers also hope to glean information about the evolution of insect flight.

"Once we pin down what type of insect it is, we can begin to think about the conditions, the climate and life that must have existed in the environment to support its life," Knecht said. "One focus is the insect itself. Another is the broader big picture of the world it lived in."

Knecht and Benner presented the fossil discovery last month at the Second International Congress on Ichnology, in Krakow, Poland.