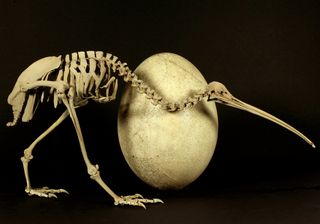 Ostriches and their flightless relatives are found across the globe not because continental drift forced them apart, but rather because the ancestors of these birds spread across the world through flight, and only later became flightless, researchers say.

The largest species of flightless birds alive today are called the ratites, and include the ostrich, emu and rhea. These birds' ancestors were once even larger, such as the elephant bird, which stood 10 feet (3 meters) tall, and the moa, which could grow nearly as large. However, not all ratites are big; smaller ones include the chicken-sized kiwi.

Ratites live all over the planet: ostriches in Africa, emus in Australia, rheas in South America and kiwis in New Zealand. The now-extinct elephant birds once lived in Madagascar. Scientists had long thought different species of ratites evolved from equally flightless ancestors after the splitting of the supercontinent Gondwana separated different populations of the birds. The ancient Gondwana landmass included what is now Africa, South America, Australia, Antarctica, India, Arabia, New Zealand and Madagascar. [Image Gallery: 25 Amazing Ancient Beasts]

Beginning roughly 130 million years ago, Gondwana broke up into what are now the landmasses of the Southern Hemisphere. Africa and Madagascar also separated early on, about 100 million years ago. This suggests that the African ostrich and the Madagascan elephant birds are the oldest branches of the ratite family tree. Genetic analyses suggest the ostrich is indeed an old species, but whether this is also true of elephant birds had been uncertain, since the extinct status of these birds made it difficult to analyze their genetic information.

After sequencing and analyzing genetic data from two species of elephant bird, scientists unexpectedly discovered the closest living relative of these birds is actually the small kiwi, and not the large ostrich, to which the elephant birds bear a closer physical resemblance.

"We found that elephant birds and kiwis arose from a common ancestor around 50 million years ago," said lead study author Kieren Mitchell, an evolutionary biologist at the University of Adelaide's North Terrace Campus in Australia. "This is after even New Zealand had become isolated."

In fact, elephant birds are only distantly related to ostriches, the researchers said.

"It was a real surprise that elephant birds are most closely related to kiwis — it's completely unprecedented," Mitchell told Live Science. "No one in over a century of study has proposed this relationship. This is because the two groups are just so different. Elephant birds are 3-meter [10 feet] tall, 275-kilogram [600 lbs.] giant herbivores from Madagascar, while kiwis are 5-kilogram [10 lbs.], secretive, shy, nocturnal omnivores from New Zealand."

The unexpected relationship between the elephant bird and the kiwi "highlights the power of evolution to produce radically different forms over a relatively short period of time," Mitchell said. The scientists detailed their findings in the May 23 issue of the journal Science.

The new study suggests that ratites did not evolve from populations of a common flightless ancestor that were separated by continental drift. Rather, it appears these flightless birds surprisingly evolved from ancestors that flew long distances to new corners of the world and then evolved independently to be flightless.

"We have to completely reconsider the origin of ratites as a whole," Mitchell said. "It totally changes our understanding of how these lineages moved around and arrived at their current homes. They can't have rafted on continental fragments — they must have flown."

The common flighted ancestor of modern ratites may have come from a now-extinct group of birds known as lithornithids. "They would have been quite small, unassuming birds, probably about the size of a chicken or quail, not dissimilar to tinamous from South America, a group of flighted birds closely related to ratites," Mitchell said. "Interestingly, lithornithid fossils are known from Europe and North America, places where we don't find ratites today, which is evidence that they were a widespread and highly mobile group."

The researchers estimate the ancestors of modern ratites dispersed around the world roughly 65 million years ago, around the time of the mass extinction that killed off the dinosaurs. "We think that this dispersal was probably in response to the opening of a huge range of ecological opportunities following the mass extinction. It would have been a free-for-all for those groups that survived," Mitchell said.

Fossils of large mammals do not start appearing until about 10 million years after that mass extinction. "After this point in history, competition with mammals seems to have prevented any new groups of large flightless birds from arising, except on islands where there are no mammals — for example, the dodo on Mauritius," Mitchell said. [Wipe Out: History's Most Mysterious Mass Extinctions]

It remains a mystery why these lineages of flying ratites all independently became flightless birds. "That's the million-dollar question," Mitchell said. "It's remarkable that elephant birds, rheas, moa, ostriches and emus all evolved their very similar body types and size independently from a small, flighted ancestor."

The answer could be linked to the end of the Age of Dinosaurs. After so many giant, flightless creatures went extinct with the dinosaurs' demise, these flying birds might have evolved to fill the empty roles in the ecosystems that followed, the researchers said.

"It may simply be that their ancestors were already predominantly ground-feeding birds, and so [they] naturally transitioned into the large, flightless niche when it became available. First come, first served," Mitchell said.

However, "right after the mass extinction that wiped out the dinosaurs around 65 million years ago, we see a number of other groups of giant, flightless birds turning up — phorusrhacids in South America, gastornithids in Eurasia and dromornithids in Australia — but each of these groups is now extinct," Mitchell said. "So it may not be that ratites are inherently predisposed to becoming giant and flightless, but that they have done it in a way that has allowed them to stand the test of time."

Although the puzzle about the evolution of these flightless birds is not yet solved, "we've added a crucial missing piece, and it's caused us to reevaluate how all the other pieces might really fit together," Mitchell said. "To learn more about the early history of ratites, we really need to find some new fossils, preferably from around 60 million years ago, to figure out where and when the ancestors of ratites were moving. Unfortunately such remains are extremely rare."