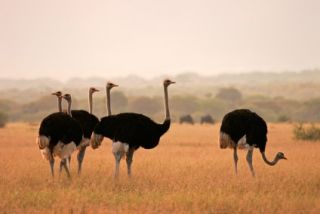 The largest and heaviest living bird, the ostrich is flightless and instead is built for running. With its powerful legs, the ostrich can sprint in short bursts up to 43 mph (70 kph), and can maintain a steady speed of 31 mph (50 kph).
(Image: © Stockxpert.)

The wings on ostriches, the largest living birds, were oncethought to be evolutionary leftovers that lingered around even after the birdsadapted to life on the ground, retained mostly for display andtemperature-control purposes.

"These findings happened by coincidence — what I wasreally looking at were their legs," researcher Nina Schaller, a biologistat the Senckenberg Research Institute in Frankfurt, Germany, and the Universityof Antwerp in Belgium, told LiveScience. "Ostriches are the fastest long-enduranceanimals alive — no other animal can run half an hour at 70 kilometers (43miles) an hour, and so their legs were originally my main focus."

How to studyostriches: VERY carefully

To study the birds in a natural, controlled environment,which allowed them free space to perform without constraint, the scientistsraised ostrichchicks in a large outdoor German pastures, feeding them by hand.

"Ostriches can be very dangerous and can react withviolent, even lethal, kicks, and so it was crucial that we shared a deep levelof mutual trust," Schaller explained. "Feeding them got them used tome as their mama."

After three years, when the ostriches were full-grown, thescientists video-recorded them as they raced down nearly 1,000-foot (300-meter)stretches outdoors. They found the ostriches used wings as sophisticatedair-rudders for rapid braking, turning and zigzag maneuvers. Experiments thatplaced ostrich feathers in streams of air showed they could indeed provide lift,which would come in handy for animals that did fly.

"You have to stop thinking about their wings as flightorgans and as stabilizers instead," Schaller said. "Think about whenyou run around a curb — you use your arms, too, a little like the ostrichesdo."

Some modern flightlessbirds might use their wings in similar ways. "South American rheasexecute rapid zigzagging as a means of escape, and use their wings to maintainbalance during these agile maneuvers," Schaller explained.

However, other relatives such as the Australian emu and thecassowary have small wings that they hold tightly to their bodies andapparently do not use in locomotion.

"The ostrich lives in the savannah, where the openspaces mean the investment in keeping wings makes absolute sense,"Schaller said. "The cassowary, on the other hand, lives in the rainforestsof Australia and New Guinea, where having long wings wouldn't be verybeneficial." Emus, on the other hand, apparently don't engage in zigzagrunning like ostriches, but flee predators with short bursts, and thus wouldnot need the advanced maneuverability seen in ostriches.

Schaller and her colleagues' findings suggest that some ofthe largest and fastest-moving dinosaurs, such as the 26-foot (8-meter)-long Gigantoraptor,also employed their feathered arms for increased stability and maneuverabilitywhen running just as ostriches do. This would have reduced the energy it wouldtake such dinosaurs to move their giant bodies, leaving them more fuel to runlonger and faster.

"They had long legs too, so why should they not haveused wings in the same way?" Schaller said. "Ostriches, like allother birds, are descendents of theropod dinosaurs — it would make sense thatthey have similar behaviors."

The scientists detailed their findings on July 1 at theSociety for Experimental Biology annual conference in Prague.