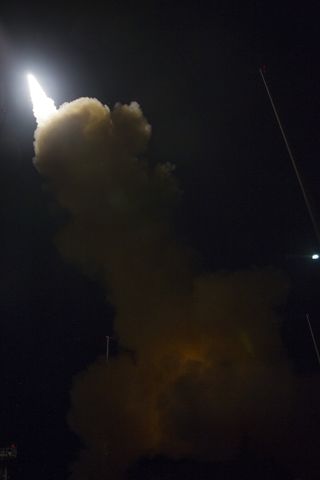 The Aegis Ashore Weapon System launched a Standard Missile-3 from an onshore launch site for the first time on May 20, 2014.
(Image: © Missile Defense Agency)

The successful missile launch late Tuesday (May 20) from a test site at the Pacific Missile Range Facility on the island of Kauai, Hawaii, represents an important milestone for the Navy, which will soon be charged with operating the first of two planned land-based Standard Missile-3 (SM-3) sites in Romania.

"There are few differences between launching a Standard Missile-3 from a ship versus land-based systems," Wes Kremer, vice president of Air and Missile Defense Systems at Raytheon, the American defense contractor that manufactures SM-3 systems, said in a statement. "It's the same missile, sea- or land-based. This provides defense planners and the warfighter with incredible flexibility to address the whole gamut of threats and geographic locations." [7 Technologies That Transformed Warfare]

The overlap between the sea-based and land-based systems will likely come as a relief to the sailors preparing to leave for the Romanian SM-3 site in 2015.

The site is an integral part of the United States' European Phased Adaptive Approach (EPAA) — a missile defense plan designed to protect American personnel and allies in Europe from ballistic missile attacks, according to the U.S. Department of Defense. A second SM-3 site is slated to be operational in Poland by the year 2018.

"Romania's Aegis Ashore site will complement other U.S. Navy ships already in the area carrying SM-3s," Mitch Stevison, senior director of the Standard Missile-3 program at Raytheon, said in a statement. "Not only will more of Europe be covered, but the coverage that currently exists will be more robust."

The EPAA is based on the Aegis Ballistic Missile Defense System, or Aegis BMD, which is a sea-based system. The land-based component of the Aegis system — dubbed Aegis Ashore — has long been in the works but is just now being put to the test.

During this week's test, a simulated ballistic missile target was acquired, tracked and engaged by the Aegis Ashore system, according to the Department of Defense. The live-fire test was designed to confirm the functionality of Aegis Ashore with ship-based missiles. The experts who witnessed the test expressed satisfaction with the outcome.