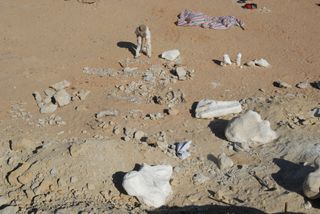 Here, the quarry in the Gobi Desert where one of the Deinocheirus dinosaur specimens was found.
(Image: © Phillip Currie)

For decades, the dinosaur Deinocheirus has been known for its impressive reach, with arms and fingers that together measured more than 6 feet (2 meters) long, and claws with foot-long (32 centimeters) curves.

In recent years, paleontologists have discovered more remains of this dinosaur, whose name means "terrible hands." But they arrived too late to get a skull or foot bones — poachers had already taken those parts.

After turning up in a private European collection, a skull and both feet from one animal have been returned to their country of origin, Mongolia, where officials welcomed them with a repatriation ceremony earlier this month. [See Photos of Diverse Dinosaur Fossils]

The rediscovery of the stolen skull and foot bones has given paleontologists new insight into this ancient beast, which they believe to be a massively overgrown ornithomimosaur, an ostrichlike dinosaur. For instance, the skull — which measures about 3.3 feet (1 m) long — holds a broad bill, similar to that on a hadrosaur (duck-billed dinosaur), which suggests the animal had a vegetarian diet, said Philip Currie, a paleontologist at the University of Alberta who has studied Deinocheirus and was involved in the repatriation.

The dinosaur may have used its long arms and claws to reach tall plants or into water, Currie said.

The feet, too, are much broader than those of a typical ornithomimosaur, because they had to support much more weight, possibly in a wetland environment, he told Live Science. With their long, ostrichlike legs, typical ornithomimosaurs are thought to be among the fastest of the dinosaurs. That was not the case for Deinocheirus, Currie said.

"When they get that big, everything goes out of whack. There is no way it could escape the Tarbosaurus," he said of predatory cousins of T. rex that lived alongside Deinocheirus. "Its large size may be a reason it could defend itself."

The newly returned skull and feet have been accepted as specimen No. 2 in the yet-to-open Central Museum of Mongolian Dinosaurs. Specimen No. 1 is the Tarbosaurus bataar at the center of a U.S. court battle and smuggling case before its return to Mongolia last year. Mongolian law makes all fossils found within its borders state property, so they cannot be exported legally. The Deinocheirus fossils are now being studied at the Mongolian Academy of Science, said Oyungerel Tsedevdamba, Mongolia's minister of culture, sports and tourism.

In 1965, during an expedition in the Gobi Desert, Polish paleontologist Zofia Kielan-Jaworowska found the first Deinocheirus fossils: its enormous arms and claws. More than 40 years later, paleontologists with the Korea-Mongolia International Dinosaur Project, including Currie, found two more partial specimens.

But poachers had arrived first, removing the head, feet and hands. This was not an unusual discovery for Currie, who said he has seen the same pattern with Tarbosaurus specimens. [Album: A Tarbosaurus Travels from Auction to Courtroom]

"What they are after is teeth and claws," Currie said of poachers. "It's a quick way to get in and out of the desert" without attracting a lot of attention, he added.

Some of the missing Deinocheirus parts turned up when a French fossil dealer, François Escuillié, encountered the skull and foot bones in a private European collection and contacted Pascal Godefroit, a paleontologist with the Royal Belgian Institute of Natural Sciences. When Godefroit saw the fossils, he knew they belonged to a huge ornithomimosaur, and he contacted Currie, whom Godefroit knew had participated in excavations that found Deinocheirus specimens without skulls or feet.

"We compared the specimens and could immediately see that the skull and feet belonged to the same individual, without any doubt," Godefroit told Live Science in an email. "We discussed [it] with the owner, who immediately agreed to send the fossils back to Mongolia, without any compensation." Godefroit said he could not provide any details about the collection or its owner.

On May 1, Mongolia formally welcomed the fossils back with a repatriation ceremony in Ulaanbaatar. So far, the return has resonated mostly with paleontologists, but Oyungerel said she expects that the Mongolian general public will catch on when the Deinocheirus fossils join those of the famous Tarbosaurus in the new museum. "Until then, we will patiently wait for the scientific research results, and for the full depiction of this creature, to see exactly what kind of animal it happened to be," she told Live Science.

Preliminary work on the two recently discovered Deinocheirus specimens was presented at the Society of Vertebrate Paleontology meeting in November, prior to the return of the skull and feet. A journal article detailing the discoveries from the two specimens plus the recovered parts has yet to be published.