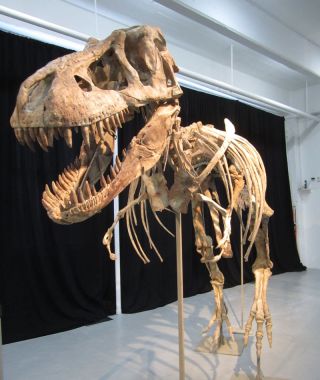 A Tarbosaurus bataar skeleton that sparked an international custody battle began its journey home on May 6, 2013, as Mongolian officials formally took possession of the fossilized bones of the T. rex-like predator.
(Image: © Wynne Parry)

When Mongolia’s most famous dinosaur, a relative of T. rex, returns to the Asian country on May 18, it returns to a homeland rich in dinosaur fossils, but with scant resources to display and study them.

But there are signs this dinosaur's celebrity status — the Tarbosaurus skeleton made headlines as the subject of a custody battle and federal smuggling case here in the United States — may help change that.

"We didn't have a single star who can be a representation of the whole paleontological heritage that we have," Oyungerel Tsedevdamba, Mongolia's minister of culture, sports and tourism, told LiveScience at a repatriation ceremony for the fossil. "That's why [the dinosaur] became like a hero that fascinates everyone and just awakened the Mongolian public to learn more about paleontological heritage of the country." [Tarbosaurus: See Images of the Celebrity Dinosaur]

When the dinosaur arrives on Saturday (May 18), the new national Dinosaur Day, it will return to a country with no dedicated dinosaur museum, only three doctorate-level paleontologists, and no university-level courses in paleontology. However, Mongolian officials have plans to change all of this.

A landlocked nation situated between China and Russia, Mongolia is slightly smaller than the state of Alaska, and is home to 3.2 million people. In 1990, the country left behind its communist Soviet system for democracy and a free market.

A number of factors — including the prolongedeconomic depression following this transition, little access to English in the past, a publishing industry that was nonexistent until recently, a shortage of paleontologists, and cultural attitudes toward bones and the dead —have inhibited the Mongolian public's interest in the country's fossil heritage, Oyungerel told LiveScience.

In recent years, mining has spurred economic growth in Mongolia, and more Mongolians are learning English. As a direct result of the Tarbosaurus case, plans are underway to establish the country's first dedicated dinosaur museum, the Central Museum of Mongolian Dinosaurs, and to train the paleontologists needed to staff it and study the nation's fossils.

Currently, one museum in Mongolia, the national natural history museum, displays dinosaur fossils. But this museum's building is old and at risk of collapsing, Oyungerel said.

In need of a new generation

While many foreign paleontologists come to Mongolia to work, the country has only three doctorate-level, or full-fledged, vertebrate paleontologists, who study the fossils of animals with backbones, including dinosaurs.

One of the three paleontologists, the youngest and the only one trained in the United States, Bolortsetseg Minjin, has been tapped as assistant director of the new museum and its chief paleontologist. The other two were trained by the Soviets, while Mongolia was a communist country.

"We really need to work hard to have a young generation (of paleontologists) as soon as possible," Bolortsetseg said.

The Mongolian government hopes to establish the dinosaur museum, with the Tarbosaurus as its first specimen, in an old Lenin museum. This museum was established during communist times to display art and artifacts related to the life of the Russian revolutionary Vladimir Lenin. [Image Gallery: Amazing Dinosaur Fossils]

However, ownershipof the former Lenin museum building is now tied up in a court case. After the dinosaur arrives on May 18, the country's new National Dinosaur Day, officials plan to house it in a temporary exhibition hall in the main square of the capital Ulaanbaatar, Oyungerelsaid.

The new museum will register all Mongolia dinosaurs, including those sent abroad on loan.

Mongolian law makes all fossils found within its borders state property; U.S. officials seized the Tarbosaurus from a Florida fossil hunter and dealer, Eric Prokopi, charging that he smuggled it into the United States.

At 8 feet tall (2.4 meters) and 24 feet long (7.3 meters) when assembled, this juvenile Tarbosaurus bataar, requires some space to display, but it isn't the only large dinosaur heading back to Mongolia.

As part of the federal case, the Manhattan U.S. Attorney's office and Homeland Security Investigations have seized additional dinosaur fossils from Prokopi and a British dealer, Chris Moore. These include other large dinosaurs, among them more Tarbosauruses. Traveling dinosaur exhibitions in Europe and Japan will add to the tally when they return to Mongolia, Oyungerel said.

"Just one giant is enough to fill the biggest hall of any museum, so we need to accommodate this list, like 20 giants, somewhere. So we are envisioning a big Giants' House in the south of Ulaanbaatar," Oyungerel said.

South Gobi province is also interested in establishing a museum commemorating the expeditions by the paleontologist Roy Chapman Andrews in the 1920s, and there is also discussion of a national dinosaur park, she said.

Mongolia has provided foreign paleontologists with a rich source of fossils from the Mesozoic Era (251 million to 65.5 million years ago), but many would like to see more Mongolians studying the fossils unearthed in their country.

When Jack Horner, curator of paleontology at the Museum of the Rockies, first visited Mongolia about 20 years ago, he noticed the absence of young Mongolian scientists.

"Even though Mongolia had some paleontologists they weren't training anyone to replace them, and a lot of other institutions were going in there and collecting fossils and bringing them out and preparing them and publishing papers on them, and they also were not preparing Mongolian students," Horner said.

He has since worked with Bolortsetseg to train Mongolian students and to reach out to the public through a nonprofit she established called The Institute for the Study of Mongolian Dinosaurs. Bolortsetseg has plans to begin another student-training program this summer, within another year, she hopes to have two future Mongolian paleontologists ready to begin graduate programs abroad. [Science Education: Top and Bottom States (Infographic)]

No paleontology courses are currently available in Mongolian universities, although there are plans for one to begin in 2014, Oyungerel told LiveScience.

After a visit to the Academy of Natural Sciences of Drexel University on May 9, Bolortsetseg said she found it to be an appealing place to send future Mongolian paleontology students.

Through a long-term project conducting environmental research at the ancient Lake Khuvshulin Mongolia, the Academy has helped produced 14 Mongolian doctorates and more than 20 master's degrees for Mongolians.

Involving Mongolians, or any local people, in research based in their country is a moral imperative, since the work is being done on their property, Clyde Goulden, who initiated the Khuvhsul project and serves as director of the Academy's Asia Center, told LiveScience in an email. It also makes for better science by deploying more researchers to explore and test hypotheses, he wrote. "Who else can do a better job of that than the scientists who live nearby and can continuously study and explore."