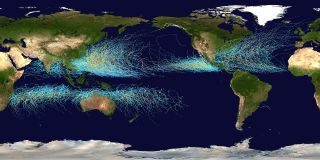 Hurricanes and typhoons are migrating from the tropics toward the North and South poles, a new study finds.

In the past 30 years, the total number of storms has remained about the same in the tropics, said lead study author Jim Kossin, a climate scientist with the National Oceanic and Atmospheric Administration's National Climatic Data Center.

What has changed, however, is the number of successful storm births.

The new study found that tropical storms don't peak in the tropics as often as they did 30 years ago. Instead, more and more storms are reaching their maximum strength at higher latitudes, according to the report, published today (May 14) in the journal Nature. [Hurricanes from Above: See Nature's Biggest Storms]

Tropical cyclones (the broad name for hurricanes, typhoons and tropical storms) spin up over and over in the same regions — a group of storm nurseries ringing the tropics — because of favorable wind patterns and ocean temperatures.

Kossin and his co-authors think a simultaneous expansion in the planet's tropical belts underlies the overall change in storm intensity. The tropics have widened by about a degree in latitude each decade since 1979, according to separate studies by other research groups. The expansion also could have pushed the ideal storm-forming regions toward the North and South poles.

"There is certainly compelling evidence the two are linked, but we're not sure exactly how — that's what we want to find out," Kossin said. "This is a link that needs to be examined."

The expansion of the tropics has been linked to global warming and ozone loss. But scientists still hotly debate the impact of global warming on hurricanes. Storms could become more or less frequent, more intense or a combination of these changes, researchers say.

"This study establishes another link between global climate change and global tropical cyclone activity," said Hamish Ramsay, a climate scientist at Monash University in Australia who was not involved in the research. "It also raises a number of new questions, though."

The poleward trek doesn't necessarily mean that ferocious storms will be hitting the Atlantic coastline more often. As climate changes, fluctuating wind patterns could cause tropical storms to move toward or away from coastlines, for instance. And the study didn't examine landfall, where storms do the most damage.

Another confounding factor: The Atlantic Ocean storm nursery did not move north in the past 30 years, the researchers reported. Kossin said he suspects that regional effects in the Atlantic, such as aerosol pollution (tiny airborne particles), could be offsetting the overall tropical widening.

By tracking where tropical cyclones hit at their strongest point, called peak intensity, the scientists discovered that storms are heading north and south. This method avoids problems with comparing storms between different oceans, Kossin said. Determining peak intensity is relatively consistent among different storm-tracking centers, he said. Other criteria, such as when a tropical storm tips into hurricane strength, can vary from center to center, making comparisons difficult.

The push poleward averaged about 33 miles (53 kilometers) per decade in the Northern Hemisphere and 38 miles (61 km) per decade in the Southern Hemisphere — a total shift of about 1 degree latitude per decade. But some oceans saw a greater change than others. The biggest moves occurred in the Pacific Ocean and South Indian Ocean, but the peak intensity of Atlantic hurricanes and storms in the North Indian Ocean showed almost no change.

Kossin said the researchers don't yet know why some oceans nurtured higher-latitude storms and others saw little change.