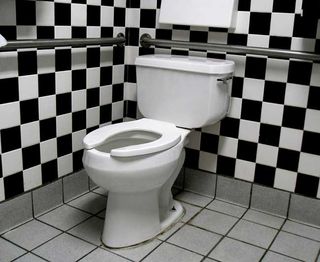 The Western World's dependence on flush toilets could be its environmental downfall. Toilets that use less water, such as the "squat toilet" in which one squats over a hole in the ground, are prevalent in parts of Asia, Europe and Africa, but a new historical study suggests that after decades of flushing, it will take radical innovations for the mainstream West to adopt any new system. "Most people can hardly imagine that other ways of handling human waste have ever existed," said study author Maj-Britt Quitzau, an environmental sociologist with the National Environmental Research Institute of Denmark. "But actually, systems did exist prior to the flushing toilet where human waste was collected within the cities and re-used in farming areas." Since the 1900s, scientists have known that flushing away human waste comes with environmental consequences , such as using precious, potable water. Each year, a typical person will use almost 4,000 gallons of drinking water to flush away 75 pounds of feces and 130 gallons of urine, according to a 2001 study by the Swedish International Development Cooperation Agency. While drinking-water shortages plague millions in such places as India and in some African nations, Westerners continue to oppose alternatives to the flushing toilet. 'Earth toilets' To understand the West's preference for flushing toilets, Quitzau surveyed historical research on attitudes toward human excrement and the technological development of water and sewage systems. She then analyzed statistical data on current attempts to introduce alternative solutions. The research suggests that in order to succeed, toilets designed to save water must hurdle our culture's long history of city planning and well-intentioned obsession with hygiene. Westerners have not always been addicted to flushing toilets. In the 1850s, for example, a recycling "earth toilet" was as American as apple pie. It consisted of a seat placed over a container filled with dry earth. After use, more dry earth was piled into the container. Instead of throwing away the waste in the container, farmers put it to use in agricultural fields as compost. Convenience and city planners However, with the introduction of sewer systems in major cities and new moral attitudes toward human waste products, the labor-intensive method lost out to the convenience of the flush, according to Quitzau's research, detailed in the August issue of the journal Technology in Society. The flushing toilets required water and sewage system to facilitate easy and enclosed removal of waste. Even with its added expense, Quitzau said, "city planners and health personnel became some of the principal spokesmen for flushing toilets. They were troubled about the problems that growing urbanization brought along in the Western cities at this time." In the city of Stockholm alone, the number of water-flushing toilets rose from 127 to more than 80,000 between 1890 and 1925, according to a study reported in a Swedish Science Press journal. At the same time, environmentally sound earth closets, considered less sanitary, went extinct. Composting toilets Although many Westerners would never consider turning in their flushing toilet for a night pot or a cesspool, some pioneers are thinking outside the bowl. Composting toilets (which rely on bacteria to convert fecal matter into fertilized soil) require no water, and urine-separating toilets rely on a minimal amount of water to wash waste into one of two compartments in the bowl. The technologies remain relatively unpopular because people in developed countries are programmed—and their houses and cities are built—to flush it all away. "Perhaps sometime in the future," said Quitzau, "people in Western cities could accept the idea of using human urine and feces as resources instead of as wastes." Until then, the unsanitary stigma will haunt some of the modern replacements for water-flushing toilets. Quitzau says composting toilets are unfavorable because, although much improved technologically, they still remind people of ancient, unappetizing waterless technologies, such as the earth closet or outhouses. Vacuum toilet Building flush-free toilets to satisfy the masses will not be simple and, unlike the composting toilet, may require mimicking toilets that flush and must be user-friendly, Quitzau said. "This is not something, which can be suddenly changed," she said. "Houses are built with respect to flushing toilets, not with respect to composting toilets requiring a collection chamber in the basement. Urban planners are taught about sewage systems and not sustainable toilet systems, where human urine and feces are collected and transported to farming areas." Currently, toilet technologies are focused on convenience, comfort and design, rather than sustainability, Quitzau says. However, the vacuum toilet—familiar to airplane passengers—is one technique that has some potential for appealing to Westerners stuck in their old flushing ways. The noisy vacuum toilet functions similarly to a flushing toilet. Yet the environmental costs of the energy-sucking suction may not be worth the tradeoff. The most likely candidate to replace the flushing toilet will most likely incorporate the convenience of flushing toilets with the sustainability of composting toilets. "The stability of flushing toilets is still strong, and it will take both technological advancements and changes in social and cultural patterns in order for more sustainable toilet solutions to gain a stronger foothold," Quitzau said.