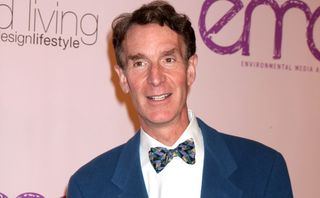 Nye recently stirred up some controversy when he and author and creationist Ken Ham debated whether creationism is a viable way to explain how the universe came to be. Nye spoke with Live Science about the debate, his work with The Planetary Society, why humans should go to Mars and other topics.

You can read an edited transcript of the conversation below:

Live Science: How did Carl Sagan help you when you were first thinking of starting the "Bill Nye the Science Guy" TV show?

Bill Nye: I petitioned his [Sagan's] assistant at that time … she arranged five minutes, so I sat with him for five minutes. He said, "Focus on pure science. Don't do technology. Kids resonate to pure science" — that was his verb. It gave me a lot of food for thought. So, instead of doing a show about bridges, for example, we did a show about structures, and this expanded to bones and tendons and leaves and tree trunks and sea jellies and so on and so on.

Live Science: Is there another show like "Bill Nye the Science Guy" on TV today?

Live Science: Why do you think kids' shows like yours are important?

Nye: Well, we're just trying to change the world here, that's all. For me, what's at stake is the future of the U.S. and the future of the world. I'm not kidding. We want to raise a generation of students who are scientifically literate. I hope many of these people will become scientists, and especially engineers, and [that] they will innovate. What keeps the United States in the game, what keeps the United States able to compete on the world stage, is our long tradition of innovation, our long tradition of new ideas. You don't get those without basic research. You don't get those without people trying to solve problems that have never been solved before.

We all rely on our smartphones and our Internet and our farm food, but we would not have any of this without innovation and science. We don't want to raise a generation of students that does not embrace science, who are not scientifically literate. The U.S. is still the world leader in so many things, so we want the U.S. to lead the way in this innovation.

Live Science: What can people do to help bolster that kind of innovation?

Nye: We wouldn't question for a moment the value of investing in basic research, but the U.S. Congress does [question it] unless it has to do with the military. We would not hesitate to invest in the Centers for Disease Control [and Prevention]. We would not hesitate to send people to Mars, rather than the situation we have now, where Congress has dictated or specified certain spacecraft and then the world's largest space administration [NASA] has to shape its programs to somehow use this hardware which otherwise would have no purpose … It's this thing where Congress specifies programs without funding them, and that's just a formula for stuff not getting done.

Live Science: Why should humans go to Mars?

If we had such a program, a really thought-through Mars program, we would just have innovation. We would be solving problems that have never been solved before … If we were engaged in some extraordinary mission to an extraordinary world, a lot of stuff would happen. That's why we at The Planetary Society especially advocate continually for planetary science.

Live Science: As someone who has participated in scientific discourse for years, how does science stand in the public eye now, compared to in years past?

Nye: We have this huge rise in what I will call — for lack of a better term — "geek culture," where people like being scientifically literate. However, at the same time, we have this crazy polarization where we have this enormous number of people, especially influential people — and by that I mean government officials and members of Congress, for example — that eschew science and don't accept it and poo-poo it as a trivial pursuit.

This wouldn't matter — except we're all going to die. Climate change is a very, very serious issue. If you have scientifically illiterate leaders that insist it's not an issue, it's just a formula for disaster. Science is being embraced and celebrated by an enormous segment of society, but it's also being cast aside and suppressed by an influential minority.

Live Science: I'd like to ask you a bit about the debate you had with Ken Ham about creationism and science.

Nye: I thought it would be a little debate … I thought it would be like a nice college gig, which I do quite a lot, and it's an honor and I love it. It's fabulous. I thought there would be some Twitter activity. There'd be some Facebooking, some Instagraming, but it turned into this big old thing. Frankly, I'm glad it did. [Creationism vs. Evolution: 6 Big Battles]

Live Science: How do you feel about some of the more negative responses to the debate? For example, there were people in academia who didn't think you should take part in the debate at all.

Nye: To my academic colleagues who were very critical of me for doing this: This is one of my favorite expressions — you may be right. In the short term, it may be that this promoted creationism or energized the creationist political base more than the scientific literacy base. Right now, at the end of April 2014, I believe that in the medium- and the long-term, this will undermine creationism. I cannot get over the number of people that watched that thing.