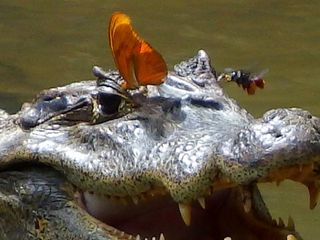 A butterfly and a bee drink the tears of a caiman.
(Image: © Carlos de la Rosa)

Crocodile tears may be drinks for thirsty butterflies and bees, new research reveals. The insects likely rely on croc tears for salt.

The discovery was made when aquatic ecologistCarlos de la Rosa was sailing on a slow, quiet boat down the Puerto Viejo River in northeastern Costa Rica with researchers, students and visitors to watch and photograph wildlife in December.

It was "like traveling back in time when rivers were the main highways for both humans and wildlife," said de la Rosa, director of the La Selva Biological Station for the Organization for Tropical Field Studies in San Pedro, Costa Rica.

The researchers photographed and filmed butterflies and bees fluttering about the corners of the eyes of a spectacled caiman (Caiman crocodilus) — a crocodilian that can reach up to 8.2 feet (2.5 meters) long — that was basking on the riverbank. The insects were drinking the giant reptile's tears. [See Video of Butterflies Drinking Croc Tears & Tear-Drinking Images]

"It was one of those natural history moments that you long to see up close," de la Rosa said in a statement. "But then the question becomes, what's going on in here? Why are these insects tapping into this resource?"

Although salt is plentiful in the ocean, the molecule technically known as sodium chloride is often a rare and valuable resource on land. Animals sometimes drink salt from sweat, urine and even blood, de la Rosa said.

When de la Rosa did research online, he was surprised to find more evidence of tear-drinking than he expected, not only from scientists, but also casual tourists, wilderness enthusiasts and professional photographers. This suggests tear-drinking or "lachryphagous" behavior may not be as rare as biologists had assumed.

It remains uncertain what other kinds of nutrients might be in crocodilian tears in addition to the sodium in salt.

"While sodium is an essential element for the metabolism and reproduction of these insects, there are also proteins, enzymes and micronutrients that could also play a role in the fitness of the insects tapping this resource," de la Rosa said. "Not a lot has been published on these topics, and all published reports indicate the need for further research."

Scientists also aren't sure whether the reptiles somehow benefit from such tear-drinking. The reptiles may allow insects to drink tears simply because they do not care, or cannot easily drive them away.

"The caiman seemed very tolerant of both the butterfly and the bee," de la Rosa said. "However, I've seen these bees approach river turtles, and the turtles are not as tolerant or pleased, shaking their heads and eventually even jumping back on the water. The insects definitely seem to benefit, but we don't know what, if any, benefits are received by the caimans."

De la Rosa detailed the findings in the May issue of the journal Frontiers in Ecology and the Environment.