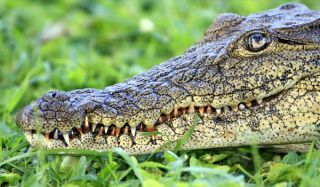 Yes, crocs do shed tears while chomping down on prey, but scientists aren't sure why.
(Image: © doc_ | sxc.hu)

Yes, observations have shown that crocodiles and their close relatives do indeed shed tears even as they rip into their prey. But scientists aren't sure why.

Ancient anecdotes of "crying" crocodiles led to the expression "crocodile tears" to describe someone who shows fake sorrow. But it's unlikely that crocodiles or their relatives experience faux grief, said study team member Kent Vliet of the University of Florida.

"In my experience, when crocodiles take something into their mouth, they mean it," said Vliet, who recently confirmed the tearing behavior in alligators and caimens, close croc relatives.

The tears might instead function similar to saliva in humans, helping the animals digest their food, Vliet said. The "lacrimal," or tear, glands of crocodilians are connected to their sinuses, and one idea is that tears produced in the eye empty into the sinuses and drain down into the throat.

"The old idea is that they may provide lubrication of the food as it's being swallowed, and the tearing that we see is due to an over-production of tears," Vliet said.