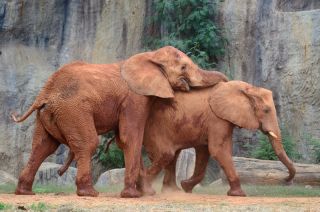 A male elephant may have to chase after a potential mate and stop her movement with his trunk. Other times, no chasing is involved, and the male will simply rest his head on the back of the female before he mounts her.
(Image: © Worakit Sirijinda | Shutterstock)

Elephants are widely regarded as being among the most intelligent animals on the planet, exhibiting behaviors once thought reserved for humans, including problem solving, tool use and apparent grief over the death of a relative. But are their mating behaviors anything like ours?

To start, elephant society and human society are quite different. Elephant herds consist of a matriarch — the oldest, most dominant female — and her female relatives. Males are only part of the group until puberty, at which point the females push them out.

Males roam around on the outskirts of the small female groups, sometimes alone, sometimes with a couple of other bulls. Like the female groups, males also have a hierarchy, with the oldest and largest male typically being the dominant one, said Janine Brown, a reproductive physiologist at the Smithsonian National Zoological Park in Washington D.C.

However, about once a year a male will enter a state called musth, where his testosterone levels and aggression spike for up to a few months — during this time, he can take the dominant position, even if he's not the eldest.

Females have reproductive cycles throughout the year. When a female is in estrous, she releases pheromones (chemical signals) in her urine and vaginal secretions. If a male comes into the herd, he will gauge the reproductive state of the females by sniffing their urine and genitalia. [Fun Facts About Elephants]

Males sometimes compete for the right to mate with a female, but this generally only happens if there is a question about who's really in charge (such as if two males are both in musth).

"Elephants settle their disputes through intimidation," Brown told Live Science."Though there certainly are cases of elephants being gored by another elephant."

A female may perform an "estrous walk," where she walks away from the male with a long gait and her head held high and to the side. The male has to then chase after her and stop her movement with his trunk. Other times, no chasing is involved, and the male will simply rest his head on the back of the female before he mounts her. "I wouldn't say it's an overly romantic gesture," Brown said.

Copulation is quick, lasting for less than a minute. The male has a long, oddly shaped penis that can move independently of his pelvis — a necessary feature, given that the female's reproductive tract is located between her hind legs, facing the ground. Deed done, he will guard her from other males for about two days (and mate with her again during this time), until she is no longer in estrous.

The pair then part ways. The male quickly moves on to romance other females. The female, on the other hand, spends the next two years pregnant; she won't mate again for at least another year after her calf is born.