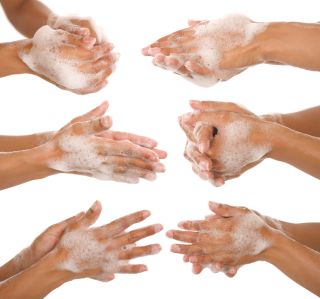 Frequent, repetitive handwashing may be a sign of obsessive-compulsive disorder, or OCD.
(Image: © caimacanul / Shutterstock.com)

Anxiety-producing intrusive thoughts — considered to be a common symptom of obsessive compulsive disorder, or OCD — may actually be widespread in the general population.

A new study found that more than 94 percent of people have unwanted, intrusive thoughts and impulses.

The study involved 19 researchers from 13 countries who surveyed 777 people. The participants were asked detailed questions to gauge whether they experienced intrusive thoughts, such as a feeling of contamination, an image of their house on fire or a sudden urge to hurt someone.

Such thoughts are considered different from worries and ruminations about past events. The researchers said they found that 94.3 percent of people reported at least one type of unwanted, intrusive thought during the last three months.

The results show that intrusive thoughts aren't unique to patients with OCD, said Adam Radomsky, lead author of the study and a psychology professor at Concordia University in Canada. Rather, what separates people with OCD from those withouth the condition is their reaction to having such thoughts, he said.

"For instance, most people who have an intrusive thought about jumping off a balcony or a metro platform would tell themselves that it's a strange or silly thing to think, whereas a person with OCD may worry that the thought means they're suicidal," Radomsky explained in a statement. "OCD patients experience these thoughts more often, and are more upset by them, but the thoughts themselves seem to be indistinguishable from those occurring in the general population.”

The results of the study were first published online in October 2013 as part of a series on intrusive thoughts in the Journal of Obsessive-Compulsive and Related Disorders. The researchers announced their findings in a statement today (April 8).