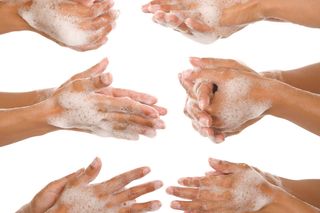 No matter how much they wash themselves, some people can't wash away mental contamination.
(Image: © caimacanul / Shutterstock.com)

In Shakespeare's "Macbeth," after Lady Macbeth helps to murder King Duncan, she laments that no matter how much she scrubs, her hands will "ne'er be clean."

Doctors today are faced with a similar problem. Like Lady Macbeth, many patients feel unclean, even when no physical contaminant exists.

"We see compulsive washing a lot, mostly as a symptom of obsessive-compulsive disorder (OCD), but also in people who have suffered a physical or emotional trauma," psychologist Stanley Rachman wrote in an editorial published today (Nov. 6) in the journal Nature.

An irrational fear of dirt and germs is known to drive compulsive washing in people with OCD. For instance, some OCD sufferers restrict sexual activity to a specific room in the house due to a fear of sexual fluids, Rachman wrote. [What Really Scares People: Top 10 Phobias]

"It is a feeling of internal dirtiness caused by a psychological or physical violation," Rachman wrote. "The source of the pollution is not an external contaminant, such as blood or dirt, but human interaction."

Degradation, humiliation, hurtful criticism and betrayal can all cause mental contamination. Patients can experience feelings of dirtiness from direct contact with the person who wronged them, or from indirect means such as images or other reminders of that person.

Just as the characters in J.K. Rowling's "Harry Potter" refuse to speak the name of the evil Lord Voldemort, these patients might refuse to utter their perpetrator's name.

Treating a disease with an invisible cause is challenging. In OCD patients who fear a specific physical contaminant, one form of therapy involves repeatedly exposing them to the source of their fear. For instance, patients who are germophobic might be made to touch garbage.

Up to a quarter of these patients refuse the therapy or drop out, Rachman said, and of those who stay the course, as many as three in 10 don't improve. But the treatment may fail in these cases because the source of the problem is psychological, he suggested.

Rachman led a study of 50 young women who had been sexually assaulted. Many of the women reported feeling "polluted" after the assault and engaged in compulsive washing. But a substantial minority, Rachman wrote, continued to feel unclean for months afterward.

Rachman and his colleagues claim they have developed an effective treatment for mental contamination that helped 12 patients with severe OCD in a nonblind study (a study in which the researchers knew which patients received which treatment). The scientists now plan to conduct a larger randomized, controlled trial of the therapy.

If the treatment is effective, Rachman wrote, "We would at last be able to treat the many patients who are currently, like Lady Macbeth, beyond our help."