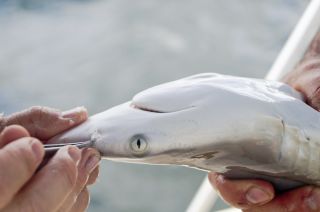 A blacktip shark is fitted with nose plugs for a study on sensory systems in sharks
(Image: © Madelaine Verbeek)

It turns out that blindfolding a shark or plugging its nose isn't enough to deter it from going after prey. When a shark gets hungry, it will use all the senses it has available to hunt down something to eat, a new study reveals.

The goal of the study was to figure out how sharks use their different senses together, rather than isolating one sense at a time. Researchers examined three species of sharks — blacktip, bonnethead and nurse sharks — in an artificial flow channel inside the Mote Marine Laboratory in Sarasota, Fla.

"The biggest motivation with this multisensory approach was to try to understand what they're really doing in a natural environment with sensory cues," said Jayne Gardiner, a postdoctoral fellow at Mote who led the study.

She added that researchers have been wanting to do this kind of work for decades, but the sheer amount of data, the size of the facility and the cost required to do this were challenges.

"We were looking at sharks approach food from 8 meters [26 feet] away, and that's not something that most facilities can do. That's one of the great benefits of doing this at Mote Marine," Gardiner said, adding that a large grant from the National Science Foundationhelped knock down the cost. [See Video of Hunting Sharks]

The flow channel constructed in Mote's tank was just big enough to hold a shark on the move, along with a holding pen to contain it while the prey was tethered at the opposite end, upstream. (For nurse sharks and blacktips, the prey was pinfish, and for bonnetheads, it was shrimp.)

Once the shark was released, it would careen down the 7-foot-wide (2 meters) channel toward the prey. The researchers used high-speed cameras to capture the sharks' movements. Each trial was scheduled for 10 minutes, but sometimes, the shark would be out of the gate and eating in less than 10 seconds.

In addition to sight and smell, sharks use their head and body (or lateral line system) to sense water movements, so researchers treated those senses with an antibiotic to destroy the hair cells that make up the receptors. (The cells grow back after a couple of weeks.) The researchers also used electrically insulating material to cover the electrical connections between the skin and the water, which sharks also use as a sense. (Electrosensory systems are used to find naturally occurring electrical stimuli, and is common among creatures in water since water is a much better conductor than air.)

However, human impacts on sharks' environment are affecting the animals' senses, scientists say. For instance, pollutants are hard on the sharks' eyes and noses, and heavy metals and antibiotics can damage the lateral line system.

Gardiner hopes to use her findings to understand how adult sharks navigate back to their birthplace when they are ready to give birth.

Gardiner's work, which was a part of her doctoral research at the University of South Florida, was published today (April 2) in the journal PLOS ONE.