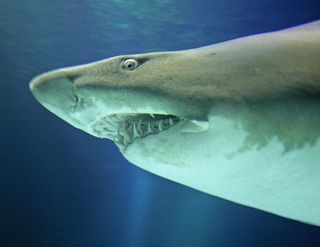 A nurse shark swims in an aquarium.
(Image: © stock.xchng)

Like dogs, sharks rely on a keen sense of smell to track down food. But new research shows noses aren’t the only way that sharks detect smells: Their entire bodies, in fact, function as giant noses capable of even picking up the “shape” of a smell. Running down the sides of every shark are nerve-packed strips called lateral lines. Researchers know these sensitive structures can detect the faint vibrations emitted by living things in water, but their ability to pick up scent was previously unknown. Even more surprising, researchers said, is that lateral lines can detect the 3-D “plumes” of scents—structures resembling the turbulence left behind after waving a hand through thick fog or steam. "Odor plumes are complex, dynamic, three-dimensional structures used by many animal species to locate food, mates and home sites," said Jelle Atema, a Boston University biologist and co-author of the study detailed in an upcoming issue of the Journal of Experimental Biology. When deprived of the “odor plume” information, the study shows, sharks are unable to find the source of an odor. To figure this out, researchers ran a stream of squid odor through a circulating water tank and noted a shark’s ability to find the source—with no eddies and plumes to track, the shark almost always failed. They then used the same setup, but added a brick behind the scent source, thereby jumbling up the flow of the squid smell and giving the shark more information to track it. Sure enough, the sharks fared much better in locating the "prey." Researchers also numbed the lateral lines with a common antibiotic, producing a similarly disabling effect on the sharks ' hunting abilities. "The results are interesting for our understanding of animal navigation under water and for the development of guidance of autonomous underwater vehicles,” Atma said.