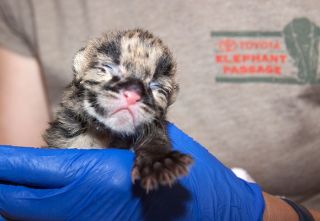 The Denver Zoo welcomed two absurdly cute clouded leopards this month. The cubs, which are the first of their species to be born at the zoo, are still awaiting names.

Caretakers have apparently stepped in to help rear the cubs after their mom Lisu (LEE-soo) didn't tend to the babies after giving birth on March 14, perhaps because she was hand-raised herself and lacks the experience to raise babies, zoo officials said.

Adored in zoos but elusive in the wild, clouded leopards (Neofelis nebulosa) get their name from the patches on their fur that resemble clouds. The cats also sport the largest fangs relative to their body size of any feline and they can weigh 30 to 50 pounds (14 to 23 kilograms).

Native to the dense tropical and subtropical evergreen forests of Southeast Asia and parts of China, clouded leopards grow to about 5-feet-long (1.5 meters), though half of that length is tail. The cats are listed as "vulnerable" by the International Union for Conservation of Nature, or IUCN, as they're threatened by deforestation for agriculture.