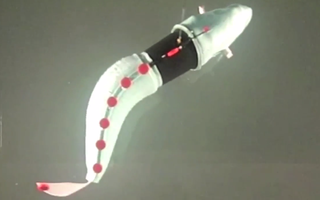 Robot fish could one day be enlisted for undercover science missions.

A soft-bodied robot that looks and swims like a fish was unveiled by researchers at MIT this week; they say something like it might be able to infiltrate schools of real fish and gather data about their behavior.

The autonomous robot swishes side-to-side underwater as different parts of its body are inflated and deflated with a fluid stored as a gas onboard, the creators explained in a video. The result is a flexible robofish can execute escape maneuvers just as quickly as a real fish can — turning its body in a mere 100 milliseconds. [The 6 Strangest Robots Ever Created]

For years roboticists have been working on durable, flexible bots that mimic other squishy creatures, such as earthwormlike robots that could survive blows from a hammer and octopus-inspired bots that could squeeze into small places for exploration or search-and-rescue operations.

The newly revealed robot belongs to a long line of fish-inspired creations, including RoboTuna, an underwater automaton with 2,843 parts controlled by six motors that came out of MIT in 1994.

Since the new fish robot is self-contained, it does need some hard parts inside its soft body. The "brains" of the fish, or all of its rigid pieces of hardware, are stored at the head, while the robot's lower half and tail are more pliable, the researchers explained. The team used a 3D printer to make the molds for casting the fish's silicone rubber parts.

In addition to greater flexibility and durability than their rigid counterparts, soft robots may be safer for humans.

"As robots penetrate the physical world and start interacting with people more and more, it's much easier to make robots safe if their bodies are so wonderfully soft that there's no danger if they whack you," Daniela Rus, director of MIT’s Computer Science and Artificial Intelligence Laboratory, said in a statement.

There is at least one practical drawback to the robot in its current iteration: It exhausts its supply of carbon dioxide gas after just 20 or 30 escape maneuvers. The researchers hope a next-generation version of the fish will be able to swim for a half-hour straight, using pumped water instead of carbon dioxide to inflate the channels.

A description of the fish robot is free to read online in the inaugural issue of the journal Soft Robotics this month.