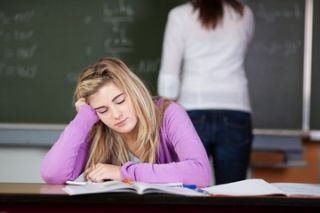 Obese adolescents who do not get enough sleep may be at an increased risk of heart disease and other health issues, compared with other obese teens who get more sleep, a new study suggests.

Researchers looked at the teens' risk factors for developing heart disease, diabetes and stroke, and found that the less sleep the adolescents got, the higher their "cardiometabolic risk score," which is a measure that combines the risk of developing these conditions into a single number.

It turned out that only five of the teenagers in the study slept for at least 8.5 hours per night, which is the recommended minimum for this age group. The remaining kids slept about 7 hours per night.

"We know that obese adolescents, just because of the fact that they are obese, they are already at a higher risk for developing cardiovascular disease," IglayReger said.[10 Ways to Promote Kids' Healthy Eating Habits]

"We found that, even in a high-risk population [such as obese adolescents], the amount of sleep does seem to matter," she told Live Science.

The results of the study do not mean that insufficient sleep directly causes obesity, heart disease or diabetes, the researchers said.

In general, sleep issues appear to be a common problem among adolescents, the researchers said.

"Teenagers are notorious for not sleeping enough," because they often want to stay up later and sleep in later during the day, which is hardly possible due to their school schedules, IglayReger said.