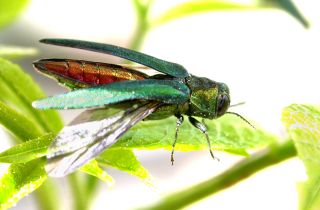 The winter weather that has blasted the Midwest and the Northeastern United States hasn't won many fans.

But the sub-freezing temperatures breaking records across the country have one group of observers cheering: biologists, many of whom hope that a polar vortex or two will help slow the northward march of invasive species.

"I'm probably one of the few people that really roots for an extremely cold day, because I really do think it helps with some of the major insect problems that we have," Robert Venette, a biologist with the U.S. Forest Service in Minnesota, told NPR. [6 Invasive Pests Threatened by Cold Weather]

The Earth's average temperature warmed 1.53 degrees Fahrenheit (0.85 degrees Celsius) from 1880 to 2012, according to the Intergovernmental Panel on Climate Change. And as temperatures across the globe creep higher and higher, plants and animals that thrive in warmer climates have expanded their ranges.

Many of the creatures with expanded ranges are invasive pests, like the emerald ash borer (Agrilus planipennis) and the hemlock wooly adelgid (Adelges tsugae), both of which have decimated native tree populations in the Northeast.

"Given that temps have gotten really cold, and not for one night but for an extended period, there's a tendency for a lot of people to hope for insect mortality," Deborah McCullough, a professor of entomology and forestry at Michigan State University in East Lansing, told the Capital News Service (CNS).

But not all bugs succumb easily to icy weather and subfreezing temperatures. The emerald ash borer, which burrows beneath the bark of ash trees to feed on the water- and nutrient-carrying tissue of the tree, has a strategy for over-wintering.

"It will stay under the bark, so it's protected there. It will actually purge all the stomach contents of its gut because that could freeze," entomologist Tom Tiddens told NPR. "They actually fold themselves in half when they do that."

Other insects use antifreeze proteins to keep their internal organs functioning in subzero weather. "Insects go through a physiologically intense process of acclimatization in the fall, and there're actually changes in their bodies," McCullough told CNS. "It's the equivalent of having antifreeze."

But not all pests are so well adapted to winter: Populations of hemlock wooly adelgids, which kill evergreens by feeding on the plants' needles year-round, are expected to plummet.

"The lethal temperature for the woolly adelgid is minus 4 or 5 degrees Fahrenheit [negative 20 or negative 21 degrees C]," Richard S. Cowles, a scientist with the Connecticut Agricultural Experiment Station, told The New York Times. "I was cheering a couple of days ago because most of the adelgids will be dying from the temperatures we saw."

Other vulnerable pests include the southern pine beetle (Dendroctonus frontalis), the brown marmorated stinkbug (Halyomorpha halys) and ticks (Ixodes sp.), which can transmit Lyme disease and other illnesses.