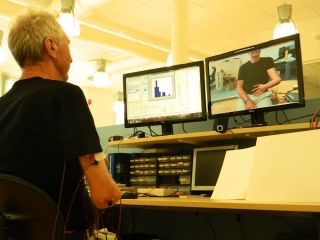 In the augmented reality environment, the patient can see himself with a superimposed virtual arm, which is controlled by muscle signals from his arm stump.
(Image: © Ortiz-Catalan et al., Frontiers in Neuroscience)

Amputees who suffer from phantom-limb pain could get some relief, thanks to a potential new experimental treatment involving virtual reality.

One man who suffered severe phantom pain for 48 years after his arm was amputated reported a dramatic reduction in his pain after the experimental treatment, in which signals from his limb stump controlled a virtual reality arm, according to a case study detailed today (Feb. 25) in the journal Frontiers in Neuroscience.

The therapy is promising, but will need to be tested in controlled clinical trials with more patients to prove its efficacy, scientists say.

After people lose an arm or a leg, they often experience painful sensations of their missing limb, known as phantom pain. As much as 70 percent of amputees experience phantom pain, which can be chronic and debilitating. The pain's causes are unknown, but may result from remaining brain representation of the missing limb.

Current treatments for phantom pain include drugs, acupuncture, hypnosis and "mirror therapy," which involves an amputee placing their intact limb inside a box with two mirrors positioned so the normal limb appears where the amputated limb should be. The reflection in the mirrors tricks the brain into thinking the reflected limb is the missing one. Mirror therapy has shown some effectiveness in small studies, but remains controversial.

In the new study, Ortiz Catalan and his colleagues developed a therapy that involves augmented reality, and tested it on the man, whose phantom pain hadn't responded to other treatments.

Electrodes recorded muscle signals from the stump of the patient's arm, and used software to convert those signals into movement of a virtual arm, superimposed over a video of the patient taken with a webcam. By thinking about moving his missing arm, the patient was able to control the virtual arm, using it to perform tasks such as driving a simulated car in a racing game.

The patient reported that his pain gradually reduced, and he experienced pain-free periods over the course of his virtual reality treatments. He said his hand changed from feeling painfully clenched to feeling open and relaxed.

In contrast to mirror therapy or virtual reality systems that are controlled by the intact limb, the new system uses signals from the damaged limb itself, so it could also be used by bilateral amputees, the researchers said.

One of biggest problems with traditional rehabilitation is that patients don't complete their therapy, Ortiz Catalan told Live Science. The new virtual reality therapy would be more fun and engaging, he said.

The use of residual muscle activity to control a virtual arm isn't completely new, said Tamar Makin, a neuroscientist at Oxford University, in England, who studies phantom pain but was not involved in the study. Researchers have also used muscle signals from a limb stump to control prosthetic limbs.

Makin praised the work, but said it was difficult to draw conclusions about the treatment's effectiveness until a controlled study with more patients can be done.

The Chalmers University researchers plan to run such a study, in collaboration with Sahlgrenska University Hospital, the University of Gothenburg and the medical technology company Integrum.

Meanwhile, the researchers have developed a version of the system that can be used at home, once it is approved. Patients who have restricted mobility because of a stroke or spinal cord injury might also benefit from the therapy, the researchers said.