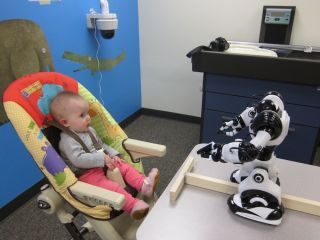 A dancing robot is used to test babies' tempraments at the University of Denver lab of Elysia Poggi Davis.
(Image: © Stephanie Pappas for LiveScience)

DENVER — My daughter is sitting in a high chair, watching a black-and-white robot almost as big as she is bust a move.

A Vegas floor show this is not, but for a 7-month-old, a dancing robot is either fascinating or terrifying. How my daughter (or any baby) responds to such a display can reveal the child's temperament. And that, among other things, is what brought us here to this cheerful neurodevelopment lab decorated with cartoons of zebras and giraffes.

Here at the University of Denver, psychologists are working to understand how the early environment affects a child's life course — but the environment that researchers Elysia Poggi Davis and Pilyoung Kim are interested in isn't just the home or the neighborhood, but also the womb.

Stress hormones (and medications that mimic them) may have long-lasting effects on infants, Davis and Kim have found. And exposure in the womb is where it all begins.

"I think we're becoming aware that we have to start thinking of these things during pregnancy, not waiting until after the baby is born," Davis told Live Science. [7 Ways Pregnant Women Affect Their Babies]

I met Davis and Kim through a postcard I received after my daughter's birth, urging me to get in touch with the University of Denver if we'd like to participate in infant psychology research. As a science writer, I was interested, and Davis and Kim were willing to let me use my baby as a guinea pig to better understand the work they're doing.

Both researchers are interested in the hormonal influences on development. Davis, the reason my daughter is gaping at a dancing robot, published a study in 2011 in The Journal of Child Psychology and Psychiatry in which she followed 116 women throughout their pregnancies, testing their levels of cortisol, a hormone released in response to stress. Testing took place every month or so in the second and third trimesters. After the babies were born, the researchers measured each infant's cortisol after a routine blood draw from the foot, and also recorded each baby's response to the blood draw.

Researchers found that the greater the exposure to Mom's cortisol in the womb, the larger was the infants' own cortisol spike in response to a blood draw in the first day of life. These cortisol-exposed infants also calmed down less readily after the blood draw ended. [5 Ways Your Cells Deal With Stress]

Davis is now researching the effects of synthetic cortisol given to mothers during pregnancy. When doctors fear that a mother might go into preterm labor, they give these glucocorticoid drugs in order to mature the baby's lungs before birth. There's no doubt this medication saves lives when babies are born early, Davis said. The problem is that predicting preterm labor is difficult, and 30 percent to 40 percent of women given the drug end up making it to full term.

"We really don't have a good understanding of what that means for Mom or baby, and there's a huge variation in how women respond to this treatment," Davis said.

Davis has found that in children ages 6 to 10 exposed to high levels of glucocorticoids in the womb, a brain area called the rostral anterior cingulate is thinner than in kids not exposed to high levels. The region is associated with emotional regulation, Davis said, and the kids with the thinning were generally more anxious.

To investigate, further, Davis is now recruiting mothers who are currently pregnant from local hospitals. After the women's babies are born, both moms and babies come to Davis' giraffe-emblazoned lab and go through a number of tests. Most of these tests look like play time: A research assistant gives the baby various objects, like cubes and toy cups, to see how well the child can manipulate them. The researchers test the baby's vocabulary (my daughter responds neither to her own name nor to the name of our dog, her favorite creature on the planet), and, of course, the child's temperament. Throughout these tests, researchers take swabs of the baby's saliva to measure cortisol. [9 Brainy Baby Abilities]

The inequality of stress

Everyone responds differently to stress, of course. A stressor that leaves one person with a palpitating heart and trembling fingers might be met by another with ease. But stress, especially chronic stress, is not an equal-opportunity specter. Poor women are far more at risk.

"If poor parents are working multiple jobs, if they have chronic shortages of resources, if they're trying to patch together low-wage jobs, government benefits, help from friends and family and neighbors, just the job of managing all that is a tremendous source of stress and anxiety for parents," said Philip Cohen, a sociologist at the University of Maryland.

Cohen doesn't collaborate with Davis or Kim, but shares an interest in how poverty shapes lives. Newspapers and magazines are filled with hand-wringing stories about how women, mostly employed and highly educated women, are delaying childbearing. Certainly, delayed childbearing brings a risk of birth defects for baby and infertility for Mom. But a far more widespread problem than age, Cohen finds, is money.

A mother with a bachelor's degree or more who is over the age of 45 faces a 3.7-percent risk of giving birth to a child with a cognitive disability, Cohen has found. That is definitely elevated over the 1.5-percent risk for a mom with a bachelor's who is between the ages of 30 and 34. (The average age for a first-time mother in the United States is 25, and only 3 percent of births are to women over 40.)

Those high infant-mortality rates in youth, Cohen said, are "picking up the socioeconomic factors. It's mostly poorer women or women from disadvantaged backgrounds who have children when they're younger."

And potentially for good reason, Cohen added — a woman living in poverty might expect even worse health by the time she's 30. Cohen's findings have been accepted to the journal Sociological Science, but have yet to be published.

A few weeks after my daughter and I visited Davis' lab, Kim and her colleagues come to us. Kim's work is specifically focused on how stress, both prenatally and postnatally, influences a mother's bond with her child. Kim and her team have just begun recruiting participants for a study asking parents about their stresses during and after pregnancy, and assessing the maternal bond. They visit moms in their homes to evaluate the environment where the child is growing up.

The researchers start their visit by asking me to spit into a test tube, whereupon I learn that producing a milliliter of spit on demand is harder than it sounds. This sample, as well as others taken during the home visit, will reveal my levels of cortisol, as well as oxytocin, a hormone released during bonding.

The researchers ask a number of sobering questions that highlight the type of stresses moms and babies may face: Did anyone in the family die in the past year? Was anyone arrested or incarcerated? Did we see violence in our home or on our street? Was I physically or emotionally abused?

Our data won't be used in Kim's study (or Davis'), as my daughter is slightly too old to participate — we're a practice run for her research team. Moms who do participate in the research also do a second phase in a functional magnetic resonance imaging (fMRI) scanner. They listen to their baby's cries, recorded earlier, while in the brain scanner.

"We hypothesize that mothers who are under more stress may actually show reduced brain activity in response to their own baby's cry in the brain areas that are very important for warm and caring maternal behaviors," Kim said.

This bonding is important. A study published in 2010 in the journal Biological Psychiatry found that warm parenting can reverse the effects of too much cortisol in the womb — but if the very stress that caused Mom to overproduce cortisol during pregnancy also keeps her from bonding, it may compound her baby's problem.

All told, the findings from research like Davis' and Kim's suggest that getting kids off on the right foot should start before birth. There are few studies on how to intervene with troubled pregnant women, Davis said, but possibilities include testing for depression during prenatal visits — just as postpartum depression screening is now de rigueur. Boosting social support for pregnant women might also help, Davis said.

Ultimately, for low-income families, money and time are the biggest problems, Cohen said.

"To solve most things for children, we know how we can make things a lot better — improved health and nutrition, medical care and economic opportunity," he said.