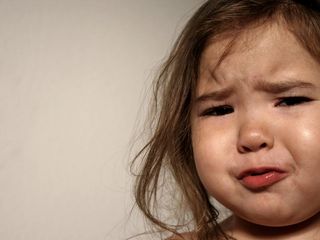 Whats'a matter? Toddlers who have moody, restless temperaments are more likely than their well-adjusted counterparts to have problems with gambling as adults, a study suggests.
(Image: © Rebecca Abell | Shutterstock )

Restless, moody toddlers are more likely than other tots to grow up to become problem gamblers, suggests a new study.

Retracing the lives of more than 900 New Zealanders, researchers found that 3-year-olds with this so-called under-controlled personality were twice as likely as those with well-adjusted temperaments to be compulsive gamblers three decades later. The findings appeared online March 28 in the journal Psychological Science.

Wendy Slutske of the University of Missouri and her colleagues reported they examined data from the New Zealand Multidisciplinary Health and Development Study. As part of that study, scientists observed  3-year-olds for 90 minutes and assigned them to one of five toddler temperament categories: well-adjusted (of which 39.6 percent qualified), confident (27.5 percent), reserved (14.8 percent), under-controlled (10.4 percent) and inhibited (7.8 percent).

The under-controlled tots were most likely to be restless, impulsive and negative; they were also less able to regulate their emotions.

Those study subjects were contacted again at ages 21 and 32, when 939 individuals answered questions about gambling behavior. Only 14 percent of the 21-year-old respondents indicated they had never gambled. Meanwhile, 13 percent indicated they had gambled in a way that would indicate a problem. Problem gamblers were defined as those who reported a preoccupation with gambling; a need to wager more and more to get the same enjoyment; financial, personal, or work-related difficulties linked to gambling; or difficulty in cutting down or quitting.

By age 32, only about 4 percent of the participants still gambled at that problematic level.

Men were more likely than women to be compulsive gamblers, as were those people with low childhood IQ and low socioeconomic status, the study showed. Even after accounting for these factors (gender, IQ and socioeconomics), however, the researchers found that moody temperament in toddlerhood was a significant predictor of disordered gambling in adulthood. [7 Personality Traits You Should Change]

Slutske pointed out that a relatively small group of people actually ended up becoming compulsive gamblers as adults. Even so, she said, the results are important given the gambling temptations in the world today, including Internet betting.

Future research, they said, could examine whether enhancing an individual's self-control and emotional regulation could help that person steer clear of problem gambling.