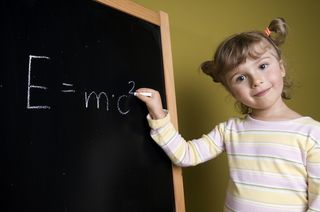 Children are eligible for Mensa membership as long as they score in the top 2 percent on standardized IQ tests for their age group.
(Image: © Gorilla, )

One of the latest members of the high-IQ club Mensa is a mere 4 years old, with an IQ of 159 — but psychologists warn against pulling out the Albert Einstein comparisons just yet.

As many media outlets have reported, Heidi Hankins of Winchester, England, scored only a point below Einstein and physicist Stephen Hawking on standardized intelligence tests. While there's no doubt that Hankins is bright (according to reports, she read at an 8-year-old level, and could count to 40, by age 2), it's not possible to compare IQ across age groups, according to Frank Lawlis, the supervisory psychologist for American Mensa.

"All you're doing with IQ testing is testing within a certain age group," Lawlis told LiveScience, explaining, "You're saying the 4-year-old is smarter than 99.5 or 99.8 of [her] age group, but that doesn't mean you can compare to another age group."

In fact, IQ scores in general have been rising over time, Lawlis said. IQ tests are always standardized so that the average score is 100. Higher scorers are brighter (at least in the domains measured by IQ testing). But in a widely noted phenomenon called the "Flynn effect," new generations taking older IQ tests score higher than 100 on average. There are multiple theories for this effect, including improved childhood nutrition, increasingly stimulating environments, and a greater number of children who are familiar with standardized tests and thus perform better.

"This is kind of a theoretical thought," Lawlis said, "but one day we may all be as smart as Einstein, and then Einstein would become average." [Amazing! 9 Brainy Baby Abilities]

Mensa is open to people who score in the top 2 percent of any standardized test of intelligence (the group offers its own test and accepts scores from the 200 or so intelligence tests out there). Victoria Liguez, the marketing coordinator for American Mensa, would not disclose numbers for how many children are members in the United States. But the youngest U.S. Mensa member, she said, is age 3.

"She joined when she was two," Liguez told LiveScience.

The youngest member worldwide, Oscar Wrigley, reportedly joined at age 2.5 with an IQ of 160. (Overall, about 110,000 individuals across 100 countries are Mensa members, including about 50,000 in the United States.)

For adults, Mensa offers opportunities for networking and intellectual-interest groups. It's not so different for children, according to Liguez. Local chapters offer field trips to museums, and mensaforkids.org offers resources, such as cool math games and other mind-boggling puzzles, for teachers and parents who might be struggling to challenge a gifted child.

Both Liguez and Lawlis said that despite the stereotypes of awkward geniuses, the Mensa children they'd interacted with had all been very normal. It's often not until testing that the depth of the children's knowledge becomes clear, Lawlis said.

"A kid's intelligence is [often] invisible," Lawlis said. "You don't usually know what a kid knows unless you ask them. … It's more of a discovery of what a kid's brain is capable of responding to."