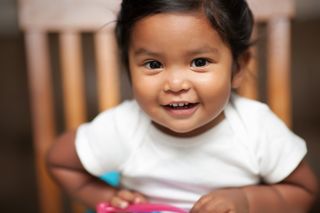 Though toddlers are not yet fully developed as conversationalists, talking directly to them could help strengthen their vocabulary and language skills, according to a new study. Overheard conversations and TV, meanwhile, don't do as much for verbal development, the research suggests.

For their study, a pair of psychology researchers at Stanford University examined what the world sounds like to 29 young children from low-income Latino families — a growing population in the United States that is underrepresented in research and at risk for academic difficulties, the team said.

Each 19-month-old wore a special shirt equipped with an audio recorder that captured all the sounds he or she heard over the course of a 10-hour day. Afterward, the researchers sifted through the sounds to determine how many words were directed at each kid, as well as how many words the kids simply overheard. [10 Scientific Tips For Raising Happy Kids]

The variation in verbal communication these toddlers experienced was quite astounding. While 12,000 words were spoken directly to one of the children during the day, another child in the study heard just 670 words, the researchers said.

In follow-up tests five months later, when the children were 24 months old, the researchers tested the kids' vocabulary and language processing skills. The kids who were spoken to more often had larger vocabularies and could interpret words more quickly than their peers who were exposed to less child-directed speech from adults.

The findings, which were detailed last month in the journal Psychological Science, suggest that simply overhearing speech is not enough to boost kids' verbal skills early on in life.

"Mere exposure to speech directed to others or on TV is not enough to drive early vocabulary development," the study's other author Adriana Weisleder said in a statement. "Toddlers learn language in the context of meaningful interactions with those around them."

In some cases, the researchers said the mothers they spoke with were unaware of how much they could help their kids learn, in part because they had not received much education themselves. But the team says their findings show that socioeconomic status does not have to determine the quality of children's language experience.

"Despite the challenges associated with living in poverty, some of these moms were really engaged with their children, and their kids were more advanced in processing efficiency and vocabulary," Fernald said in a statement.

The researchers say they are developing special games and skill-building exercises to educate disadvantaged Latino families about how to engage more effectively with toddlers.