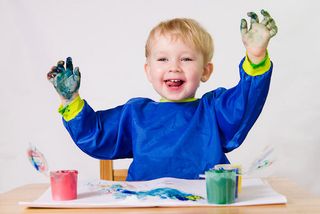 Researchers have found tots who are either highly sociable or emotionally challenged are more likely than peers to drink as teens.
(Image: © greenland | Shutterstock)

The personality traits of children in the first five years of their life may help predict alcohol use during teenage years, a new study shows.

The study, detailed today (July 10) in the journal Alcoholism: Clinical and Experimental Research, reveals certain temperaments of kids that are correlated with teen drinking.

"People don't enter adolescence as blank slates; they have a history of life experiences that they bring with them, dating back to early childhood," Danielle Dick, a psychologist from at Virginia Commonwealth University and a co-author of the study, said in a statement. "This is one of the most comprehensive attempts to understand very early childhood predictors of adolescent alcohol use in a large epidemiological cohort." [7 Ways Alcohol Affects Your Health]

For the study, Dick and her colleagues analyzed the results of a long-term study that tracked thousands of newborns in South West England from birth through 15 1/2 years. The dataset included personality information obtained from mothers in the first five years of the child's life, and from both parents and the subjects themselves thereafter.

The childhood traits that most correlated with alcohol use during teenage years fell on two sides of the temperament spectrum: emotional instability and relatively low sociability on one side, and high sociability on the other — a degree of extroversion that often leads to "sensation seeking" later in life. Tots who were either emotionally challenged or highly extroverted were more likely than other kids to grow into alcohol-drinking teens. (Past research has suggested personality is set by first grade.)

"This underscores the fact that drinking during adolescence is largely a social phenomenon," Dick said in a statement. "However, this doesn't mean it's less problematic; we know from other studies that most adolescent drinking is high risk — for example, binge drinking — and can lead to numerous negative consequences."

Most research correlating personality traits and alcohol use relies on data that starts in adolescence, because that is when kids start to drink, Dick told LiveScience. More recent studies have tracked trends all the way from birth, but this study included the broadest and most comprehensive range of factors to date.

Roughly 12,600 subjects participated in the study, but not all individuals consistently provided data each year. Only 4,600 teens provided alcohol use reports at age 151/2, but the team was able to statistically extrapolate results where data points were missing. Compared with similar studies in this field, the dropout rate was fairly low, Dick told LiveScience.

Other researchers in the field acknowledge this study as a substantial step forward, but also note the results are still not robust enough to accurately predict teenage alcohol use from an early age.

"While I think the most important finding concerns tracing personality differences back to preschool differences in temperament, we cannot, from these findings, predict with much accuracy which preschoolers will have problems with alcohol as adolescents and which will not," Matt McGue, a professor of psychology at the University of Minnesota, said in a statement. McGue was not involved in the study.

The team has continued tracking their subjects into adulthood in an effort to understand the broader and longer-term factors that contribute to alcohol habits.