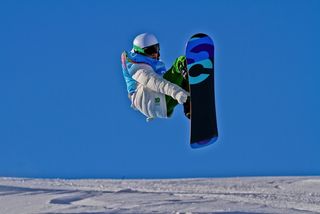 Slopestyle is a new event at the Sochi Winter Olympics 2014. Snowboarders travel down a slope dotted with obstacles, including quarterpipes, rails and progressively higher jumps. On the way, they perform feats of aerial acrobatics, with tricks like the backside triple cork 1440 — three head-over-heels flips and four full revolutions.

Snowboarding has a short Olympic history; it became an official event in 1998. Since those Games, the sport has been steadily adding events, with the parallel giant slalom, a race event, beginning in 2002, and snowboard cross, an event that takes place on a course of moguls and jumps starting in 2006.

Competitive slopestyle is a staple at the Winter X Games, but will make its first debut in the Olympics without one of the biggest names in snowboarding. U.S. snowboarder Shaun White bowed out of the slopestyle competition Wednesday (Feb. 5), just days before the Olympics began, after hurting his wrist on one of the jumps. [Photos: 6 Failed Winter Olympic Sports]

The Sochi slopestyle course is just over 2,000 feet (635 meters) long, according to designs released by the International Ski Federation. The first feature is a rail that snowboarders launch onto from a jump and then board along like a tightrope before landing back on the snow. Another jump feature is topped with a statue of a matryoshka, or Russian nesting doll, for local flavor.

Speed is key for pulling off snowboarding's death-defying tricks. As a National Science Foundation video explains, snowboarders in another event, the halfpipe, are pulled down by gravity, but pushed against the side of the halfpipe by g-forces. Competitors pump their legs against these forces to build speed, which allows them to jump higher. More time in the air means more time for tricks like the Double McTwist, the Haakon flip and the Crippler.

The men's slopestyle semifinals and finals will take place on Saturday, Feb. 8, and the women's events will be the on Sunday, Feb. 9, Sochi time.