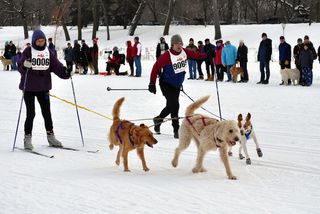 The Olympics could be even more exciting if it included skiers dancing downhill or being pulled by a pack of dogs or horses.

Some of the greatest winter sports never made it into the Olympic Games, or made it in, but only as demonstration sports, only to be discarded like a pair of used ski boots.

From downhill ski ballet set to music, to synchronized skating, to the fastest non-motorized sport on Earth, Live Science explores the wacky and wonderful winter sports that didn't quite make the cut. [9 Tips for Exercising in Winter Weather]

The name of this sport says it all: a graceful performance involving flips, rolls, jumps and spins, all performed while skiing down a gentle slope. Later, music was added to the downhill acrobatics. The Winter Olympics featured ski ballet, now known as acroski, as a demonstration sport in the 1988 Games in Calgary, Canada, and the 1992 Games in Albertville, France.

Ski ballet was a freestyle skiing discipline from the late 1960s to 2000. Suzy Chaffee, captain of the U.S. ski team at the 1968 Winter Olympics in Grenoble, France, was one of the sport's pioneers.

"I had been a ballerina when I was 6, and I had fantasies of dancing down mountains," Chaffee told Live Science.

Chaffee is perhaps best known for her pair ballet skiing and her performances in ChapStick commercials that earned her the nickname "Suzy ChapStick." Ski ballet is no longer a competitive sport, but Chaffee still teaches people how to do it.

Now here's a sport that's not for the faint of heart: In skijoring, horse, a dog (or dogs) or a motor vehicle such as a snowmobile pulls a person on skis. Possibly once a form of travel, skijoring is now mostly a competitive sport. Horse skijoring featured as a demonstration sport in the 1928 Winter Olympics in St. Moritz, Switzerland. [Sochi Photos: Winter Olympics 2014]

This sport may have been inspired by the old Scandinavian sport Pulka, in which a person on a toboggan is pulled by a dog, or sometimes, a reindeer. In dog skijoring, the skijorer holds a rope pulled by the dog, a sight that resembles a neighborhood walk gone awry. Any dog can be used, so long as it enjoys running and pulling.

Move over, Apolo Ohno — this sport isn't an Olympic regular, but it's the fastest non-motorized sport on Earth: speed skiing. As you might expect, it involves skiing downhill in a straight line as fast as possible. Italian Simone Origone holds the world record for this sport, reaching an eye-watering 251.4 km/h (156 mph) in competition. (The terminal velocity, or maximum speed due to air resistance, of a skydiver is about 190 km/h or 118 mph.)

"It is a shame we are not in the Olympics," Origone told Live Science.

Speed skiing was a demonstration sport at the 1992 Winter Olympics in Albertville, France. That year, a skier died when he crashed into a grooming machine during warm-up. But there are more injuries in alpine skiing, Origone said.

Currently, the International Ski Federation (FIS) regulates speed skiing. The races are designed so that skiers shouldn't exceed 200 km/h (124 mph), so players race to win, not for time. Professional races have no speed limit, however.

You've heard of synchronized swimming, but what about synchronized skating? It's a popular figure skating sport in which eight to 20 skaters perform together, often in parallel lines (known as blocks) or circles. Synchronized skating uses the same judging system as single and pair skating. The sport was originally called precision skating in North America, because of the emphasis on formations and timing.

Synchronized skating has been reviewed for Olympic eligibility, but has not yet been included as a sport.

The Olympics is a civilian event, but it once featured an event called military patrol. A precursor to the modern biathlon, the sport involves cross-country skiing, rifle shooting and ski mountaineering. It was part of the 1924 Olympics in Chamonix, France, and appeared again as a demonstration sport in 1928, 1936 and 1948.

The sport of bandy is best described as a cross between ice hockey and soccer. Teams of 11 players on ice use sticks to hit a ball around a rink the size of a soccer field. Bandy was played a demonstration sport in the 1952 Winter Olympics in Oslo, Norway. Bandy won't be an Olympic sport at Sochi, but the 2014 bandy world championships are currently taking place in Irkutsk, Russia.

Bandy is played enthusiastically throughout Russia and Scandinavia, and enjoys a smaller following in North America and other countries. The sport is popular in Minneapolis and St. Paul, Minn., where it's cold enough to have large enough outdoor rinks. Bandy's rules are similar to those in soccer, and the stick is similar to a field hockey stick. The game is faster than ice hockey, because the field is much larger.