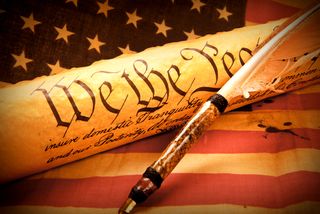 "You have the right to remain silent, and anything you say can and will be used against you in a court of law."

Those familiar words, part of an accused's Miranda rights (and a staple of police dramas), came into play in a grand fashion this week as Bridget Anne Kelly, a former aide to embattled New Jersey Gov. Chris Christie, chose to remain silent about her role in the now-infamous lane closures on the George Washington Bridge in September 2013.

In refusing to testify, Kelly exercised her Fifth Amendment rights, one of the original provisions of the U.S. Constitution's Bill of Rights. Though it's been part of U.S. law since 1791, many Americans are still confused when a defendant decides to "plead the Fifth." [8 Supreme Court Decisions that Changed US Families]

The Fifth Amendment contains several familiar protections against government intrusion, including the clause against double jeopardy (trying a defendant more than once for the same offense), the right to due process of law (including a fair trial) and the right to just compensation when the government takes private property for public use.

The clause regarding self-incrimination was developed to prevent anyone from being forced to testify against themselves, leaving the burden of proving that a person has committed a crime to the government. Thus, the Fifth Amendment enshrines the maxim that someone is "innocent until proven guilty."

John Lilburne, an obstreperous political firebrand who lived in 17th-century England, is sometimes regarded as the godfather of the right to remain silent. When brought before the Star Chamber court for the crime of circulating Puritan pamphlets, Lilburne refused to take an oath that he would answer every question asked of him.

For his intransigence, Lilburne was publicly whipped, dragged through the streets behind an ox cart, gagged and throw in prison, where he continued to campaign for what he called the "freeborn rights" of all people — the precursor to what are now called civil rights.

It's been argued that James Madison, who would eventually serve as the fourth U.S. president, had the experience of Lilburne and other English law-enforcement practices — including torture and forced confessions — in mind when he penned the original words of the Fifth Amendment: "No person shall be … compelled in any criminal case to be a witness against himself, nor be deprived of life, liberty, or property, without due process of law; nor shall private property be taken for public use, without just compensation."

Madison took care to include the right to avoid self-incrimination in the Fifth Amendment, in part because several of the states did not include that protection in their original state constitutions.

This right was extended to U.S. citizens in a fundamental manner in the Supreme Court's 1966 Miranda v. Arizona decision. In that landmark ruling, the court found that the Fifth and Sixth Amendment rights of Ernesto Arturo Miranda had been violated after he was arrested and tried for rape and kidnapping.

While the Fifth Amendment protects an arrested person from being compelled to be a witness against himself (self-incrimination), the Sixth Amendment guarantees that a person will have access to legal counsel for his or her defense. It was deemed that Miranda was denied these rights.

Limits to the Fifth

Though the Fifth Amendment offers broad protections, there are limits to its use. An important exception was added in 1984, when the U.S. Supreme Court found, in New York v. Quarles, that if public safety is at immediate risk, a suspect's statements are admissible in court, even if his or her Miranda rights have not been explained.

And in an important child-abuse case, Baltimore City Department of Social Services v. Jacqueline Bouknight, the U.S. Supreme Court ruled in 1990 that a parent with limited custody rights cannot refuse to tell a judge the child's whereabouts. Protections against self-incrimination did not apply because of the immediate risk to the safety of the child.