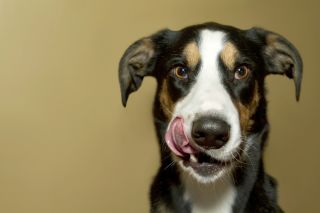 Marc Bekoff, emeritus professor at the University of Colorado, Boulder, is one of the world's pioneering cognitive ethologists, a Guggenheim Fellow, and co-founder with Jane Goodall of Ethologists for the Ethical Treatment of Animals. Bekoff's latest book is Why Dogs Hump and Bees Get Depressed (New World Library, 2013). This essay is adapted from one that appeared in Bekoff's column Animal Emotions in Psychology Today. He contributed this article to LiveScience's Expert Voices: Op-Ed & Insights.

Peeing and pooping positions with respect to a dog's orientation have recently been in the news, because of a recent study that showed that dogs line themselves up with the Earth's magnetic field when they urinate and defecate. This discovery was rather surprising and generated a lot of interest worldwide. I received emails from people that ranged from being downright crude, to humorous, to very serious.

Some, motivated by this finding, began watching dogs at dog parks to see if there was any trend in how dogs oriented themselves when they peed or pooped. The results were about 50:50 — supporting or refuting the recent discovery — and I cautioned them that they likely needed more control over the situation to make an accurate assessment because when dogs are together they show a strong tendency to orient themselves to the location of another dog or dogs. Previous research I'd conducted on urination and scent-marking in dogs showed this to be the case.

More recently, a discussion in New Scientist magazine called "The bottom of it" caught my eye, and it began with an interesting observation and several questions. Knowing that non-human animals do not use lavatory paper (and those that I have observed don't appear to need it), are there anatomical reasons for this? If so, why is human anatomy not similar to that of the great apes? Has our invention of lavatory paper, and whatever methods preceded it, meant that we have lost an anatomical feature that we once had?

Two answers were provided by Christine Warman who lives in Saltburn-by-the-Sea, North Yorkshire, U.K., and Tony Holkham who lives in Boncath, Pembrokeshire, U.K.

In the article, Warman notes, "Although we share most of our DNA with great apes, there are some striking anatomical differences between ourselves and our nearest relatives, most notably our vertical posture. This enables us to walk tall with our hands free, but it also comes at a price: we experience problems with our back and joints, and the whole business of evacuating our waste is more difficult. The fundamental problem is that the area used for releasing urine and faeces is compressed between thighs and buttocks, so we are more likely than other animals to foul ourselves. We also differ from other animals in our response to our waste, which we tend to regard with disgust. This seems to have developed as a result of living together in settlements rather than roaming through the forest, where we could leave our mess behind us. Unlike other primates we can learn when and where it is acceptable to excrete."

Holkham likewise offers some interesting views. He writes, "Wild animals, especially carnivores whose faecal matter contains material attractive to pathogens, have evolved to be able to clean themselves. You only have to watch cats 'playing the cello,' as it is colloquially called, to see how proficient they are at grooming their rear. Parents will clean their young until they are supple enough to do it themselves. Adult animals will also groom each other, forming social bonds at the same time."

He also writes, "Domesticated animals selectively bred by us are a different case. My dog, for example, cannot clean his hind quarters because he is too short and stocky in the body; we have to check that he is clean after he has defecated. Similarly, sheep have to be inspected regularly because their body shape prevents them from keeping themselves clean. Many species, humans included, have adapted their front legs to be hands—helpful for self-grooming. The use of plant material to clean the anal area would have been an evolutionary adaptation. Vegetable matter was substituted with a sponge on a stick in Roman times, and more recently with paper."

Bekoff's most recent Op-Ed was "Empathic Rats Free Trapped Buddies From Restraints" This article was adapted from "Perils of Pooping: Why Animals Don't Need Toilet Paper" in Psychology Today. The views expressed are those of the author and do not necessarily reflect the views of the publisher. This version of the article was originally published on LiveScience.