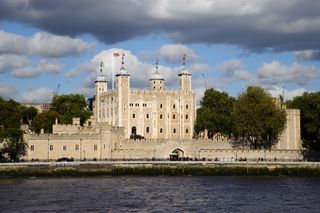 Throughout its history, the Tower of London has served many purposes, including royal residence, barracks, armory, prison and museum.
(Image: © Marek Stefunko | Shutterstock)

The Tower of London is a 900-year-old castle and fortress in central London that is notable for housing the crown jewels and for holding many famous and infamous prisoners.

Throughout its history, the tower has served many purposes: it housed the royal mint (until the early 19th century), a menagerie (which left in 1835), a records office, an armory and barracks for troops. Until the 17th century, it was also used as a royal residence.

William the Conqueror created the first fortifications after the conquest of London in A.D. 1066. The Norman invader lacked support among the people of the city and he feared its inhabitants could throw him out.

William of Poitiers, an 11th century writer who described William the Conqueror and his conquests, wrote that “certain strongholds were made in the city against the fickleness of the vast and fierce population.” These would come to include what is now called the “White Tower,” the innermost building in the castle, which gained its named after the exterior was whitewashed in the 13th century by King Henry III.

Tower historian Geoffrey Parnell writes in his book "The Tower of London Past & Present" (Sutton Publishing, 1998) that the tower was expanded for about 250 years after William the Conqueror’s time. Today, the complex's series of buildings and fortifications sprawls over 12 acres (5 hectares).

Throughout its history the tower was used to imprison a wide range of prisoners, from deposed monarchs to more common criminals. Prisoners included Lady Jane Grey, who was queen for about a week in the 16th century before she was deposed by Mary I.

Also imprisoned there were two princes, Edward and Richard, ages 12 and 9, who were the sons of Edward IV (died 1483). They appear never to have left the tower alive and some thought they were killed by Richard III, their uncle who took the throne for himself.

Two of Henry VIII’s wives, Anne Boleyn and Katherine Howard, were both imprisoned and later executed. Henry VIII, who turned England into a Protestant country, also had a number of dissenting clergyman committed to the tower and later killed, including his former counselor Thomas More.

Another notable prisoner was Guy Fawkes, who in 1605 attempted to blow up the House of Lords and the monarch by detonating gunpowder in the cellars below. He was imprisoned in the tower and tortured.

“The king authorised the use of torture on Fawkes, with ‘gentler methods’ to be used first and, if he did not co-operate, more brutal ones later,” writes historian Stephen Porter in his book "The Tower of London: The Biography" (Amberley Publishing, 2012). He notes that Venetian ambassador Nicolo Molin wrote that “for two successive days he underwent the most excruciating torture without saying anything except that the conspirators were twelve in number, whose names he would not mention.” Fawkes was executed not long afterward.

The history of torture at the Tower of London is a popular subject; however, Porter notes that many of the prisoners, particularly those of noble birth, were treated well. In some cases, they were even allowed to have servants at the tower and leave the castle at times.

One of the best descriptions of torture comes from John Gerard, a Jesuit who was imprisoned in 1594 during a time of religious upheaval. He later escaped and survived to tell a tale of being tortured in what appears to be the basement of the White Tower.

“Then they put my wrists into iron gauntlets and ordered me to climb two or three wicker steps. My arms were then lifted up and an iron bar was passed through the rings of one gauntlet, then through the staple and rings of the second gauntlet. This done, they fastened the bar with a pin to prevent it slipping and then, removing the wicker steps, they left me hanging by my hands and arms fastened above my head.” (Source: Tower of London website)

In the late 18th and 19th centuries, the tower was used less commonly for prisoners. The last prisoner of note to spend time in the tower was Rudolf Hess, Hitler’s deputy, who fled to Scotland in 1941 and was sent to the tower briefly until he was transferred.

Crown jewels and other treasures

Today, the crown jewels are one of the most popular attractions at the Tower of London. The jewels include the crowns worn by the monarch at coronation and at the opening of Parliament.

Porter notes that the use of the tower as a repository for royal treasure began in earnest in 1303, when a number of treasures were stolen from the Abbey of St. Peter at Westminster. The remaining treasures were brought to the tower, which was the most heavily fortified spot in London, for safekeeping. A new jewel house was built against the south side of the White Tower in 1508.

Much of the royal regalia were destroyed in the mid-17th century when England became a republic for a brief time. “The oldest piece of the Regalia [surviving today] is the 12th century gold Anointing Spoon, used to anoint the Sovereign with holy oil,” writes a team of researchers on the official Tower of London website. “Apart from the three steel coronation swords (the Swords of Temporal Justice, of Spiritual Justice and of Mercy), this is the only piece that survived the destruction of the pre-Civil War Regalia in 1649-50.”

The tower also contains an impressive collection of armor, which is a treasure unto itself. Shown in an exhibit called the “Line of Kings,” a show at the tower that first started more than 300 years ago, it features such items as a life-size wooden horse carved about 1690 and a set of armor, gilded with gold, created for Charles I around 1612.

First mentioned about 500 years ago the Warders “or ‘Waiters,’ as they were often referred to, formed and acted likely a friendly society, sharing, by way of dividends, the rewards of their official and unofficial duties,” writes Parnell. There was money to be made by renting out parts of the ground and by showing visitors around.

“The post of Yeoman Warder was handed down through the family or sold. This time-honored practice was dealt a fatal blow in 1826, when the Duke of Wellington, as Constable of the Tower, ordered that in the future the post was to be occupied by worthy non-commissioned officers of the Household Cavalry, Foot Guards and Infantry of the Line, solely on their regiment’s recommendation,” writes Parnell, noting that the Warders lost the last of their money-making privileges, the right to sell postcards, in 1923.

A flock of ravens resides at the tower, cared for by the Yeoman Warder Ravenmaster. According to the Tower of London website, legend says that the tower — and the monarchy — will fall if the six ravens ever leave the fortress.

Charles II is said to have been the first monarch to insist that the ravens be protected. He did so despite the protests of royal astronomer John Flamsteed, who complained that the ravens kept leaving droppings on his telescope. According to legend, this led Charles to move the Royal Observatory to Greenwich.

The tower as a fortress

While the tower was first built as a fortress, its usefulness as a bastion faded as gunpowder-based siege engines (such as cannons) became widely adopted in Europe.

Porter notes that new gun platforms were erected on it in the 1680s, and Parnell writes that as late as the 1860s, when the United Kingdom feared invasion by France, heavy guns were positioned near the Tower to help defend London.  However, as time went on, the tower’s military importance mainly lay in the fact that it was a central location where arms and ammunition could be kept and troops could be marshaled on their way to join armies in Europe.

Porter writes that a grand storehouse, started in 1688 and completed when William and Mary were on the British throne (1689-1702), was built to house weapons and ammunition. “The new Grand Storehouse was 345 feet (105 meters) long and 56 feet (17 meters) wide, of two stories and an attic story,” he writes. “Above the centrally placed main entrance was a large pediment, carved by John Young, with the royal arms flanked by horses, cannon, drums and other military equipment.” This pediment survives to present day.

The tower as an attraction

The history of the tower as an attraction goes back at least as early as the 17th century when the “Line of Kings” exhibition was first set up. The tower had other attractions that drew non-military visitors to it. For instance, the royal menagerie, in essence an early zoo, had a wide range of animals until it was closed in 1835, including lions, an ostrich and even a polar bear.

These animals were given as gifts to various monarchs. Porter writes that James I (1566-1625) was particularly fond of his lions. He once saw a lioness giving birth and “was so fearful that the cubs might die that he sent a description of a nipple to be attached to a glass bottle, so that they may be fed.”

Porter notes that in 1753, when the book "An Historical Description of the Tower of London and its Curiosities" was published, it included biographies of the tower’s lions and provided information on other creatures present, including a golden eagle, an ostrich, a horned owl, bears, tigers, a racoon, a leopard and even a baboon. This menagerie would be removed from the tower and incorporated into an off-site zoo in 1835, but by then there were other things to attract tourists.

The tower’s history as a prison for some of England’s most famous individuals attracted visitors, providing the Yeoman Warders a chance to show tourists around (and for a time, make some extra money while doing so). In the 19th century, the tower’s medieval history so intrigued England that the tower was “restored” in such a way that its medieval aspects were magnified.

Parnell writes that this had some unfortunate consequences as parts of the tower not seen as being “medieval” enough, such as the records office, were torn down.

Today, the Tower of London is one of the most famous castles in the world and is now a World Heritage Site attracting more than 2 million visitors a year. The main threat to the site today is not rebels, foreign armies or falling bombs (bomb damage happened during World War II) but rather the exhaust of cars. It’s a problem that threatens to turn the White Tower into a yellow color, something which none of the previous threats could ever do.