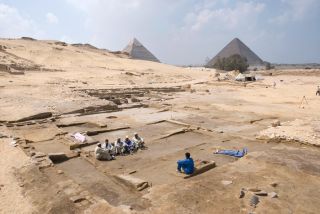 Researchers discovered the remains of a large house with at least 21 rooms near the Giza pyramids and a nearby mound containing leopard teeth, the hind limbs of cattle, and seals with the titles of high-ranking officials. (This image was taken before excavation of the house was complete.)
(Image: © Courtesy AERA.)

TORONTO — The remains of a mansion that likely held high-ranking officials some 4,500 years ago have been discovered near Egypt's Giza Pyramids. Bones from young cattle and teeth from leopards suggest its residents ate and dressed like royalty.

The house, containing at least 21 rooms, is part of a city that dates mainly to the time when the pyramid of Menkaure (the last of the Giza Pyramids) was being built. [See Photos of the Discoveries at Giza Pyramids]

"The other thing that is just amazing is almost all the cattle are under 10 months of age … they are eating veal," said Richard Redding, the chief research officer of Ancient Egypt Research Associates, at a recent symposium held here by the Society for the Study of Egyptian Antiquities.

From his sample of 100,000 bones from the nearby mound, Redding said he couldn't find a cow bone that was older than 18 months and found few examples of sheep and goat bones.

"We have very, very, high status individuals," said Redding, also a research scientist at the Kelsey Museum of Archaeology at the University of Michigan.

Besides cattle bones the archaeologists found two leopard teeth in the house and another two in the nearby mound. They, however, found no leopard bones, leaving them with a puzzle.

Redding consulted ancient drawings that date to the Old Kingdom (the age when pyramid building was at its height), between 2649 and 2150 B.C. He found that some high-ranking individuals, including members of the royal family, wore leopard skin that still had the head attached. This would explain why they found teeth — which could've fallen out of the head while the wearer was passing by — but no leopard bones.

High-ranking clergy known as "sem" priests were allowed to wear these leopard skins, and they could be members of the royal house, noted Mark Lehner, the director of Ancient Egypt Research Associates, in an email to LiveScience.

Redding was also puzzled that many cattle hind bones, yet few forelimbs, were found. For some reason the people of the house avoided eating the forelimbs of the cattle. Again Redding turned to ancient drawings. There, he found numerous examples of scenes where people presented forelimbs as offerings to deities, but almost no examples of hind limbs being offered. As such, the people of this house were likely eating the remains of offerings.

Clues to a priestly complex

This discovery may help the archaeologists identify offering places and dwellings of ancient priests. Since the elite house is full of hind limbs (the remains of offerings), Redding suspects that bone deposits that contain mainly forelimbs would be located in places where the offerings were being made. [Photos: The Lost City of the Pyramid Builders]

In 2011 Redding and his colleagues discovered what might be just such a place. Archaeologists call it the "silo building complex," and it is located near a monument dedicated to Queen Khentkawes, possibly a daughter of the pharaoh Menkaure.

"My analysis of the bones from the small excavations at (the building complex) in 2012, showed a strong bias towards forelimb elements — as to be expected in priestly garbage," Redding wrote in an email to LiveScience. "We will get larger samples this February, but right now my operating hypothesis is that the (complex) was occupied by royal cult priests."

Located near a basin that may be part of a larger harbor, this building complex "is flanked by long bakeries and contains a set of grain silos," Lehner said in his email. It "probably administered provisions and produced bread and other offerings."

The complex dates to a bit after the Giza Pyramids were built and may have been constructed at the site of an earlier town where people involved in the building of the Pyramid of Khafre (the second largest pyramid at Giza) lived.