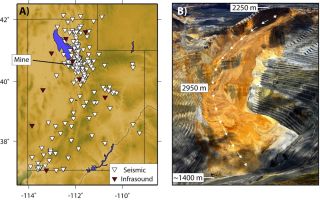 One the left (A), triangles denote University of Utah seismic and infrasound network, and location of the Bingham Canyon mine. One the right (B) is a photograph of the rock avalanche at the mine taken on April 10, 2013.
(Image: © Seismic/Infrasound image by K.L. Pankow et al. Landslide image copyright Kennecott Utah Copper.)

One of the largest landslides in U.S. history, caused by a collapse last year at a copper mine in Utah, triggered earthquakes, the first time rock avalanches have been known to do so, researchers say.

The details scientists gleaned from the rockslide could help shed light on landslides worldwide, scientists reported in the January issue of the journal GSA Today.

Investigators analyzed a mammoth landslide at the Bingham Canyon copper mine in the Oquirrh Mountains near Salt Lake City, operated by the Kennecott Utah Copper Corp. At more than 3,180 feet (970 meters) deep, the mine is the largest artificial excavation in the world. In operation since 1906, it produces 25 percent of the copper used in the United States, and has yielded more copper than any mine in history.

Landslides are among the most destructive forces in nature. The damage from the Bingham Canyon rockslide is estimated at nearly $1 billion, potentially making it the most expensive landslide in U.S. history. Landslides routinely claim lives, killing more than 32,000 people from 2004 to 2011 globally, not including earthquake-triggered landslides. However, the Bingham Canyon rockslide resulted in no fatalities or injuries.

For decades, mine operators have monitored the stability of pit slopes within the Bingham Canyon mine using a surveillance network that included automated early-warning sensors. This helped identify and track signs of increasing instability throughout early 2013, leading mine operators to successfully forecast a landslide and evacuate the area beforehand.

"The company invested a lot of money to monitor the sides of the pit, and the fact they evacuated the mine the day of the landslide so that were was no one in the pit at the time it happened is a true success story," said study lead author Kristine Pankow, a seismologist at the University of Utah.

The Bingham Canyon mine is located within a dense network of seismic and acoustic sensors operated by the University of Utah that is normally aimed at detecting, locating and analyzing regional earthquakes.

"This is the first time we've seen seismic data from a landslide in the middle of a dense seismic network," Pankow said. "This landslide has really given us a wealth of data."

The landslide happened in two sudden, distinct events separated by about 90 minutes and each lasting about 90 seconds. The researchers detected a magnitude 2.5 earthquake and three smaller earthquakes after the second event. Their analysis also revealed six similarly small quakes may have taken place between the first and second event, and another half-dozen may have occurred within 10 days after the landslide.

"These are the only quakes we know of generated by a landslide," Pankow told LiveScience's OurAmazingPlanet. "We know that earthquakes can trigger landslides, but this is the first time we've seen a landslide trigger earthquakes.

"The earthquakes caused by the landslide were really small earthquakes right under the pit," Pankow added. "They did not pose any seismic hazard."

Past studies revealed that when glaciers move, the weight they remove can lead the ground to rebound and cause detectable earthquakes. "We believe the small earthquakes that happened after the landslide are also rebound earthquakes," Pankow said.

The data the researchers gathered from this landslide could help reveal what seismic and acoustic signals landslides give off in general.

"This can help us look for remote landslides that we might not have known happened," Pankow said. "That could be important — for instance, they could block rivers, or block roads that are not used very often."