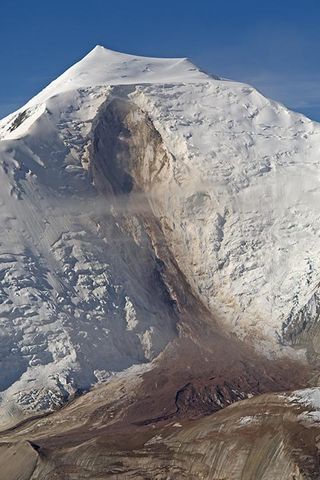 The aftermath of a massive 2007 landslide at Mt. Steele in Canada.
(Image: © Yukon Geological Survey)

Landslides carrying the weight of more than 200 million cars careen down mountains about once a month somewhere on Earth. Now, with a global network of seismic monitors, scientists can detect the biggest landslides remotely, according to a study published today (March 21) in the journal Science.

"The landslides turned out to be not only an interesting curiosity, but we are also discovering things about landslides which were not really observed before," said Göran Ekström, lead study author and a seismologist at the Lamont-Doherty Earth Observatory of Columbia University in New York.

The findings are part of an ongoing project to find "strange things" in the unusual wiggles that jog the network's seismometers, Ekström told OurAmazingPlanet. Ekström and co-author Colin Stark, also of Lamont-Doherty, sift through long-period seismic waves, which look like relaxed undulations compared to the frantic, high-frequency shaking that results from earthquakes and explosions.

Ekström and Stark spent several years fine-turning a computer algorithm that would automatically extract landslides from the chatter that constantly rattles the Earth. When a promising signal appeared, the researchers would check satellite images, news reports and blogs to verify the shaking was truly a landslide.

For a landslide's vibrations to reach remote seismometers by traveling along the Earth's surface, the energy must be as powerful as a magnitude-5.0 earthquake, Ekström said.

The researchers discovered the seismic data carried a landslide's rap sheet — its source, location and weight, along with how far and fast it moved. Surprisingly, that critical data was directly proportional to the length of the mountainside that fell off, or failed, in a landslide, the study found. The relationship was maintained whether a landslide came from a volcano blasting apart, a collapsing rocky cliff or a slurry of typhoon-soaked debris.

"This challenges the view that there are many different types of landslides and [that] there are certain characteristics that determine the behavior of landslides, such as soil type or the type of rock," Ekström said. "There is vibrant research going into understanding the dynamics of how the mass makes it down the mountain and follows the valleys. We're hoping that the fact we show the seismic signal has a lot of information will stimulate this work."

During a landslide, the cascading debris vibrates the Earth's surface, sending seismic waves through the crust, Ekström explained. The forces follow patterns similar to a roller coaster ride; the rock mass pushes down as it accelerates and drags while it slows down. The shaking is distinct from earthquakes and explosions, which make seismometers jiggle frantically with fast shaking, an initial signal that's over in just a few seconds. Landslides produce long-period undulations on seismograms that last 35 to 150 seconds.

With several seismometers, the researchers can pinpoint where the landslide started, the location of the sliding mass at any point in time and its weight. They determined that a massive slide at Canada's Mt. Steele in 2007 was 100 million tons (1011 kilograms), about the weight of all the cars in the United States, according to Ekström. The researchers have also uncovered evidence that some remote landslides that look like one event on satellite images actually consist of several rock falls that collapsed over a period of several days, not all at once.

In the future, seismic detection and analysis of landslides could improve scientist's understanding of how the rock falls work and perhaps provide warning to people living nearby, Ekström said.

"There are regions that have a lot of landslides, like the Himalayas and Hindu Kush, where it would be beneficial to know when things have happened up in the mountains," he said. [Can You Outrun a Natural Disaster?]

One example is a huge landslide above the Seti River in Nepal, which triggered a flash flood on May 5, 2012, causing more than 70 deaths. Ekström and Stark estimated some 780 million cubic feet of rock broke off a ridge near the peak called Annapurna IV, then plunged into the Seti's headwaters at about 160 mph (258 km/h) after traveling about a mile. A pilot in the area witnessed the flood and warned residents, but landslide detection could also provide advance warning.

Ekström said Taiwan is also considering using its seismic network for landslide monitoring in the wake of deadly landslides caused by Typhoon Morakot in August 2009.

"The vibrations in the Earth actually record what these forces are. We are not blind to them. Hopefully, that will help us understand landslides and use that knowledge to predict where and how they will happen," Ekström said.