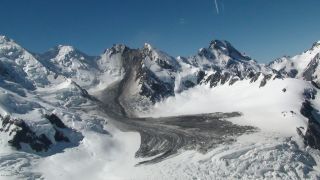 A rockfall shattered a snowy landscape and barely missed a hut full of hikers in New Zealand Monday (Jan. 21).

The steep west face of Mount Dixon at Aoraki Mount Cook National Park fell at about 2:15 p.m. local time, leaving a dark trail of rock and ice across the park's Grand Plateau, the Timaru Herald reported.

Spectacular pictures and video of the aftermath from local guiding company Alpine Guides show a debris apron covering the glacier, with snow caught up in its lobes.

The hut was temporarily closed and 15 climbers on the mountain were flown out the next day as a precaution, the Timaru Herald noted. The hut was reopened after geologists and staff from the New Zealand Department of Conservation decided any further rockfalls would head away from the hut.

The national park's largest recent rockfall was in 1991, when the top of Mount Cook fell off. The tallest mountain in New Zealand lost 32 feet (10 m) of height when an estimated 423.8 million cubic feet (12 million cubic meters) of rock and ice fell more than 1.67 miles (2.7 km) down the eastern side of the mountain.

Arthur McBride, manager at Hermitage Alpine Guides, said the latest Dixon rockfall was mild compared with the Mount Cook slide. "If Mount Cook was a 10, then this was a 3 or a 4," McBride told OurAmazingPlanet.

Why the mountains fall down

Rockfalls and landslides are common in the Southern Alps, the mountain range that includes Aoraki/Mount Cook National Park. The rugged landscape is one of the fastest-rising mountain ranges in the world. In the past 5 million years, tectonic forces have pushed up the Southern Alps by as much as 15 miles (25 km).

The peaks rise so fast that landslides are the only way to bring them down — rivers and glaciers can't do the job fast enough, researchers have found.

The fast pace of erosion from landslides matches the mountain's uplift rate of 0.4 inches (9 millimeters) per year, geologist Niels Hovius and colleagues first noted in a study published in the journal Geology in 1997. The research was confirmed in subsequent studies.

Landslides can be triggered by earthquakes, rainfall, snowmelt or a change in slope. When soil and rock can no longer hold together, they give way and slide downward. A landslide can move slowly or quickly, but either speed can have disastrous effects.