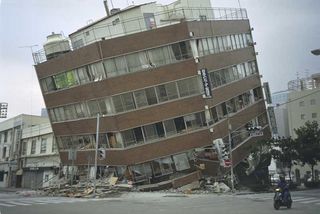 People in the United States — especially if they grew up in the Midwest — are likely to be familiar with one type of natural disaster warning: the tornado siren.

And even without that ominous whine blasting through the skies, nature itself offers up signs heralding a twister's approach. People often can figure out that a storm with deadly power may be on the way.

Earthquakes are different. Disaster strikes seemingly out of the blue. So how should authorities sound the alarm?

Even though humans can't sense when an earthquake is imminent, they have built machines that can: Sensors can use the initial spurt of energy unleashed in an earthquake to sketch a quick portrait of the torrent of far-more-damaging energy that may be following close behind.

"When a fault moves, it radiates energy, and that travels as two types of waves," said Richard Allen, director of the Berkeley Seismological Laboratory, during an interview at the recent Seismological Society of America meeting in San Diego.

The first wave, called a P-wave, Allen explained, races away from the source of the earthquake at about 3.7 miles (6 kilometers) per second. These waves can cause an initial bump but don't do much more than that.

S-waves, sometimes called secondary waves, travel at about half that speed, plowing through the crust at about 1.8 miles (3 km) per second. "And the S-wave is what carries all the damaging energy — so we can detect the P-wave and predict what's coming with the S-wave," Allen told OurAmazingPlanet. "We can use just a few seconds of data to say something about the size of the earthquake." [The 10 Biggest Earthquakes in History]

Using networks of seismometers, researchers have designed systems that can transmit in near-real time the magnitude of an approaching earthquake. If it's a potentially damaging one ?say, above magnitude 5.0 ?the system can sound the alarm in populated areas that lie in the quake's crosshairs in the moments before it hits.

"Typically we talk about seconds or tens of seconds — the most warning you could get is about a minute," Allen said.

Such systems are in place in several earthquake-prone areas, from Mexico to Romania to Italy, but the most sophisticated by far is the warning system in Japan.

Blared warnings, text messages and computer alerts not only allow people to take cover,  they can trigger automated systems that slow commuter trains, open elevator doors at the closest floor, shut down industrial hazards, and power up generators in advance of possible blackouts.

Yet all early warning systems could be improved by incorporating GPS data along with the seismic data, Allen said. For quakes larger than magnitude 7.0, seismometers start to lose accuracy, and, although it takes a tiny bit longer, GPS is very good at assessing magnitude, because it literally measures how much the ground is moving.

Although the U.S. Geological Survey says earthquakes pose a significant risk to some 75 million Americans across 39 states, the United States doesn't have an earthquake early warning system.

Allen and his colleagues are hard at work designing one for California, a region with a long history of devastating earthquakes. Called ShakeAlert, it's now in testing mode and could be up and working by 2015.

Yet even the most sophisticated earthquake warning systems on the planet won't alert people in time if they're sitting right on top of the portion of a fault that slips first during an earthquake.

"There will always be a blind zone close to the epicenter," Allen said.