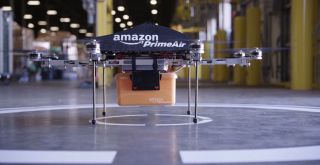 In a push to bring drones to U.S. skies, the Federal Aviation Administration (FAA) has selected six site operators to research and test unmanned aircraft across the country.

Three universities — the University of Alaska, Virginia Tech and Texas A&M University-Corpus Christi — as well as Griffiss International Airport in upstate New York, the state of Nevada and the North Dakota Department of Commerce were among the FAA's picks announced Monday (Dec. 30).

Drones have been used primarily for military purposes and other government-sponsored activities like border surveillance and environmental monitoring. But the FAA has been working on regulations for the use of commercial drones, projected to be a multibillion-dollar industry. [9 Totally Cool Uses for Drones]

The shape of some ventures, such as Amazon's Prime Air, will hinge on the FAA's decisions. Earlier this month, Amazon CEO Jeff Bezos announced his company's plans to use drones that would deliver packages in 30 minutes or less. On the Prime Air website, company officials say they hope the FAA's rules will be in place "as early as sometime in 2015" so they can begin deliveries. (Right now, manufactures can get permission to fly unmanned aircraft as part of research and development and crew training.)

FAA officials say these six new site operators "will conduct critical research into the certification and operational requirements necessary to safely integrate UAS [unmanned aircraft systems] into the national airspace over the next several years."

The geographic spread of the site operators is intended to reflect the nation's diversity of climate, topography and population density; the University of Alaska is well-equipped to study drone navigation over many different types of landscapes, while Griffiss International is well-positioned for researchers to study how drones might be integrated into congested Northeast airspace. In addition to location, FAA officials say they also considered research needs, airspace use, safety, aviation experience and risk.

"Safety continues to be our first priority as we move forward with integrating unmanned aircraft systems into U.S. airspace," FAA Administrator Michael Huerta said in a statement. "We have successfully brought new technology into the nation's aviation system for more than 50 years, and I have no doubt we will do the same with unmanned aircraft."

Each of the operators is charged with investigating some combination of the FAA's six drone research goals: system safety and data gathering; aircraft certification; command and control link issues; control station layout and certification; ground and airborne sense and avoid; and environmental impacts.

"These test sites will give us valuable information about how best to ensure the safe introduction of this advanced technology into our nation's skies," said Transportation Secretary Anthony Foxx.