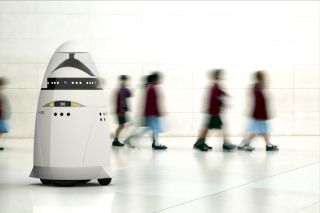 A bullet-shaped robot that stands about 5 feet (1.5 meters) tall, the K5 "security guard" looks a lot like the droid R2-D2 from the "Star Wars" films. And it may be able to help stop crimes before they happen.
(Image: © Knightscope)

Robot security guards are staples of most futuristic sci-fi movies, video games and TV shows. They exist in real life as well, though the sight of a security robot patrolling the streets is far from common.

The K5 Beta, a just-unveiled prototype from California-based company Knightscope, might change all that.

A bullet-shaped robot that stands about 5 feet (1.5 meters) tall, the K5 looks a lot like the droid R2-D2 from the "Star Wars" films. The K5 might not have all the features of its counterpart from a galaxy far, far away. But what it does have, Knightscope representatives said, is an onboard sensor array that can see, hear, touch and smell its surroundings. [5 Reasons to Fear Robots]

The K5 can also combine that sensory data with "existing raw business, government and crowdsourced social data sets, and subsequently assigns an alert level that determines when a business, community or authorities should be notified of a concern," according to Knightscope's press release.

In other words, the K5 is supposed to combine its observations with public data on the social and financial statistics of its surroundings, and use the information to predict if, when and where a crime is likely to occur.

If the K5 does detect that an "incident" is occurring, it makes all of its sensor data publicly available via Wi-Fi, "to allow the entire community to review the information transparently and contribute additional relevant, real-time information," Knightscope representatives said.

Crowdsourced crime investigations have their pros and cons, as anyone who followed the immediate aftermath of the Boston Marathon bombing knows well. Using Twitter, Boston residents were able to inform others about the events surrounding the attack and help identify the alleged bomber, but not before an innocent person was publicly named as a suspect. Presumably, the K5's software will be able to sift through crowdsourced data to find the most valuable information.

The company was founded in response to another deadly incident that gained national attention: the shooting massacre at Sandy Hook Elementary School in Newtown, Conn., in December 2012.

"Our long-term goal is to show that, with a combination of hardware, software and community involvement, we will, together, be able to cut crime," Knightscope CEO William Santana Li said in a statement.

Many people aren't comfortable with the idea of human police officers carrying video cameras or amassing a private database of footage, so it's unlikely that the public would approve of camera-toting robots. The K5's ability to make its collected data publicly available is intended, in part, to assuage those concerns, as Li told The New York Times. The idea is that people will feel more comfortable if the data the K5 collects is in everyone's hands, and not just the police or a private group.

What's more, Knightscope representatives said the K5 will be able to save money. The robot operates at a cost of about $6.25 per hour, the New York Times reports — more than a dollar below the U.S. minimum hourly wage.

The K5 has just reached beta testing, with no word on when it might become commercially available. However, "initial test deployments" are scheduled for 2014, so the sight of a robotic security guard rolling through a school, mall, museum or city street might not be that far off.