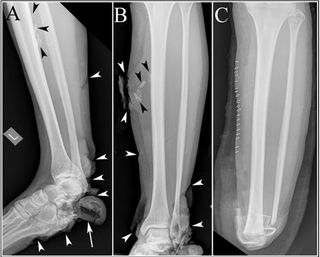 This image shows the foot and leg of a bombing victim whose foot bones were broken in several places, and whose heel bone was destroyed. In panels A and B, the black arrowheads point to shrapnel, and the white arrowheads point to the soft tissue damage to the bottom of the victim's foot and the back of the victim's ankle. The white arrow in panel A shows a large soft tissue flap where the heel bone should be (the heel bone itself is gone). Panel C shows the victim's leg after surgery, with surgical staples along the leg, the foreign bodies removed, and the lower leg and foot amputated.
(Image: © Arthritis Care & Research)

Months after the Boston Marathon bombing left dozens of victims with severe injuries, doctors are still documenting the lessons learned from the medical response that saved lives and limbs.

In a new report, researchers focus on the imaging technologies used, and what blast injuries looked like on X-ray and CT scans. The injuries that had the most devastating effects were on muscles and bones, and prompt imaging was critical to the evaluation of these injuries, the researchers said.

"I've been in the radiology field for 25 years, and I realized that we don't know a lot about what the images would look like in someone who's been in an explosion," said Dr. Ali Guermazi, professor of radiology at Boston University and one of the specialists who treated the victims at Boston Medical Center. [Images of the injuries]

"Even clinicians serving non-military victims need to be aware of the spectrum of injuries that may arise from bomb explosions," Guermazi said.

The two pressure-cooker bombs that exploded one after the other near the Boston Marathon finish line on April 15 killed three people and left 264 others injured. Many of the most severe injuries were in the legs – victims suffered fractured bones, with skin and muscle tissue ripped by the pieces of metal, nails and ball bearings used as shrapnel in the bombs.

In an explosion, injuries are also caused by the blast wave, which is extremely compressed air that moves away from the source, and can damage the lungs, bowels and ears. As the wave moves outward from the site of the explosion, it creates a vacuum, which pulls debris back toward the source of the bomb blast — the refilling of this void is known as the blast wind.

Victims from the Marathon bombing were subject to blast waves and blast wind, and their injuries required experts from medical fields including rehabilitation, orthopedics, musculoskeletal imaging and rheumatology, according to the report.

Patients needed to be examined for damage to their muscles, bones, nerves and blood vessels, the researchers said.

X-rays and CT-scans should be the first choice for assessing the injuries because they are fast and can detect foreign objects, and reveal bony and soft tissue injuries, the researchers wrote in the report published today (Aug. 19) in the journal Arthritis Care & Research. Such imaging techniques should be used liberally in urgent situations that involve patients with blast injuries, they said.

The next step after these imaging tests should be angiography, Guermazi told LiveScience. Angiography lets doctors see the blood vessels, usually by using a chemical that is injected in the blood stream to make the vessels show up on a scan. In the bombing victims, doctors used it to look at the soft tissue, blood vessels, and to find fractures and locate shrapnel, he said.

"You may expect that it's more bones or shrapnel. But some of the life-threatening injuries we found were in the soft tissue," he said.