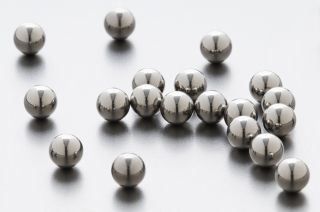 Many shrapnel bombs, like those used at the Boston Marathon, contain ball bearings or other metal objects.
(Image: © DUSAN ZIDAR | Shutterstock.com)

The shrapnel bombs detonated near the finish line of the Boston Marathon have a long and bloody history.

Shrapnel is a general term used to describe the fragments thrown off by a bomb or other explosive device. Usually comprised of nails, ball bearings, needles or other small metal objects, these shards are the leading cause of death and injury following the explosion of a shrapnel bomb.

In the 1780s, a British lieutenant named Henry Shrapnel developed a long-range artillery shell, packed with lead shot, that used a delayed-action fuse. Shrapnel's shell was designed to explode near or above the heads of enemy soldiers, causing widespread death and injury, according to Wired. [History of Human Aggression: 10 Ways Combat Has Evolved]

After the device helped the British secure victory over Napoleon's troops at the Battle of Waterloo in 1815, Shrapnel was recognized as a national hero.

Today, bombs containing shrapnel are one of the favorite weapons used by terrorists, suicide bombers and other militants, since they can be cheaply constructed, easily hidden and can spread panic and bloodshed over a wide area.

There are dozens of variations of the shrapnel bomb, but most follow the basic design of a pipe bomb: a hollow section of steel pipe capped at both ends; a low-grade explosive element (either gunpowder or some chemical compound) attached to a fuse; and metal shrapnel packed inside the hollow pipe.

When the low-grade explosion occurs, the pressure inside the steel pipe amplifies the explosive force, creating a much more powerful blast than would be achieved without the steel outer shell.

According to the Associated Press, the bombs used at the Boston Marathon contained gunpowder, small nails and metal ball bearings housed inside pressure cookers (kitchen pots with lockable lids that create a high-pressure environment not unlike a pipe bomb).

Shrapnel bombs containing steel ball bearings from 1/10 to 1/4 inch (3 to 7 millimeters) in diameter deliver the most lethal impact, according to medical experts, effectively spraying an area with thousands of small, bulletlike projectiles.

Trauma surgeons and militia experts describe the effects of a pipe bomb or shrapnel bomb using four categories, according to the Centers for Disease Control and Prevention (CDC).

Primary injuries are caused by the initial blast wave, which generally affects air-containing organs. Lung injuries and ruptured ear drums are common among people closest to a detonated bomb; sources including the Miami Herald report numerous ear injuries among the wounded in Boston.

Secondary injuries are those caused by shrapnel or other objects hurled at high speeds. These injuries are often localized in a particular area of the victims' bodies, depending on the location of the bomb (at head or chest level, for example).

Many of the patients in the Boston bombing had severe injuries to their legs (some requiring amputation), suggesting the bombs were at or near ground level, CNN.com reports.

The CDC notes that up to 10 percent of all blast survivors have significant eye injuries caused by high-speed projectiles. The Boston Globe reports that several patients were sent to the Massachusetts Eye and Ear Infirmary for treatment.

Tertiary injuries such as broken bones result from people being thrown by a blast, and quaternary injuries include burns and other thermal effects of a detonated bomb.

Most of these injuries are significantly greater when a bomb explodes within a confined area, like a bus or a closed building, according to a 2010 report in the Journal of Trauma and Acute Care Surgery. The Boston Marathon bombs were detonated outdoors, which may have diminished their impact.