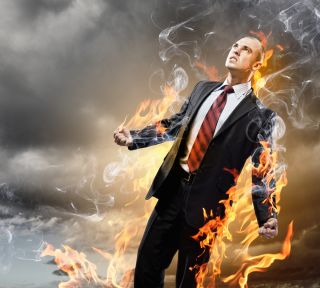 For well over a century, some have claimed that people can suddenly and inexplicably explode into a ball of fire. The phenomenon is called spontaneous human combustion (SHC), and it has been described in many popular books on mysteries and the unexplained.

Though the term "spontaneous human combustion" is of fairly recent vintage, it was a rare-but-real concern to many in the 1800s. In fact, there are nearly a dozen references to people bursting into flames in pre-1900 fiction. The most famous example is Charles Dickens's 1853 novel "Bleak House," in which a character explodes into fire, though the phenomenon can also be found in the works of Mark Twain, Herman Melville, Washington Irving and others. In modern times, SHC has appeared in movies and on television shows, including "The X-Files," and it's even, sort of, the super-power of Johnny Storm, the Human Torch, in "Fantastic Four" comic books.

Fires do not typically start on their own. When investigators search for the cause of forest fires, they don't assume that the flame ignited itself. Rather, they usually suspect that a careless camper or a lightning strike caused it. However, many things can self-ignite without exposure to flames, under the right circumstances, including coal dust, piles of compost and used oily rags.

But it's a whole different matter to claim that people can suddenly burst into flames for no apparent reason. There is no doubt that bodies can burn; crematoriums routinely reduce the human body to ashes in the course of a few hours. The mystery of SHC lies in the supposedly strange circumstances under which victims burst into flames. Typically, the story goes, there is no obvious source of ignition, no open fires nearby that might set the person aflame. Furthermore, the victims are killed, and not, for example, only partly burned on one arm or a leg; SHC is fatal. Some claim that burning often seems to begin in the chest or stomach area, leaving the grisly remains of legs and hands intact. Others claim that the furniture and floors under and surrounding the victims (including even their clothing) remain mysteriously unburned.

Some of these popular claims are simply wrong. For example, there are many photographs of supposed SHC victims that clearly show extensive burning and damage to the clothing and surroundings of the burned person. It's also important to understand a bit of fire forensics: many fires are self-limiting; that is, they put themselves out naturally because they run out of fuel. Though the public often sees uncontrolled fires completely engulfing and burning down entire rooms and buildings, fires are unpredictable. It is quite possible, for example, for only a rug, bed, or sofa to catch fire without spreading to the rest of the room. Because fires normally burn upward instead of outward, there is nothing paranormal or strange about finding a victim in one part of a room burned to death while the rest of the room has little more than smoke damage.

What about the source of ignition? What could possibly cause people to suddenly burst into flames? A century ago, it was blamed on intemperance and even God's wrath: most victims were assumed to be drunkards who had saturated their cells with alcohol. In the 1970s, a quasi-Freudian explanation came into vogue suggesting that a person's depressive emotional states could somehow cause him or her to become enflamed. Others have suggested that sunspots, cosmic storms, gas-producing intestinal bacteria, or even a buildup of the body's supposed "vibrational energy" may be to blame.

Yet all these explanations are pseudoscientific, and there is no evidence for any of them. Our bodies are about 60 percent to 70 percent non-flammable water, and the simple fact is that there is no physical or medical mechanism by which a person could possibly self-combust. If people truly could suddenly burst into flames without being anywhere near an open flame, presumably there would be examples that have occurred while the victim was swimming, in a bathtub, or even scuba diving. Yet those cases do not exist.

Only about a dozen claimed real-life cases of SHC have been investigated in any detail. Researcher Joe Nickell examined many "unexplainable" cases in his book "Real-Life X-Files" and found that all of them were far less mysterious than often suggested. Most of the victims were elderly, alone and near flames (often cigarettes, candles, and open fires) when they died. Several were last seen drinking alcohol and smoking.

If the person is asleep, intoxicated, unconscious, infirm or otherwise unable to move or put the flames out, the victim's clothes can act as a wick (most people spend most of their time wrapped in flammable clothing made up of cottons and polyester blends). The flames draw on the body's fat (a flammable oil very near the skin's surface which combines with the burning clothing) to fuel the fire.

There is also a rare medical condition called Stevens-Johnson syndrome that, in extreme cases, may be mistaken for a case of an aborted spontaneous combustion. The skin disease, which can be triggered by a toxic reaction to medications, including antibiotics and prescription painkillers, causes the appearance of severe burns and blisters, and can be fatal.

If SHC is a real phenomenon, why doesn't it happen more often? There are 7 billion people in the world, and yet we don't see reports of people bursting into flame while walking down the street. No one has ever been seen, filmed or videotaped (for example, on a surveillance camera) suddenly bursting into flames. It always happens to a single person left alone near a source of ignition.

And if some natural (but unknown) mechanism causes the combustion, why would it only occur in humans? Why wouldn't cows, dogs, elephants, birds or other animals suddenly, randomly and inexplicably explode in a ball of flames now and then? Even if the phenomenon is incredibly rare, with billions of animals on the planet, statistically we should expect to see thousands of them exploding every day all around us.

Though there is no scientific evidence that SHC exists, now and then a case makes the news when officials cannot find another explanation. In 2011, a coroner concluded that Michael Faherty, an elderly Irishman living alone who burned to death in his home in December 2010, may have spontaneously combusted. Though Faherty's body was found a few feet away from an open, burning fireplace the coroner decided that it had not set him afire.

Benjamin Radford, M. Ed., is deputy editor of Skeptical Inquirer science magazine and author of six books including "Scientific Paranormal Investigation: How to Solve Unexplained Mysteries." His website is www.BenjaminRadford.com.