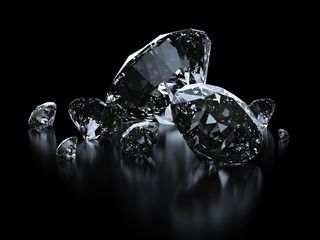 Diamonds are found in a type of rock called kimberlites, now known to be found on every continent on Earth.
(Image: © Diamond image via Shutterstock)

The finding, detailed online Dec. 17 in the journal Nature Communications, suggests the gems could be found on every continent, researchers say.

Diamonds form under the immense heat and pressure found nearly 100 miles (160 kilometers) below Earth's surface, in the planet's mantle layer, which is sandwiched between the outer crust and the core. Powerful volcanic eruptions bring these precious stones to Earth's surface, where they are embedded in blue-tinged rocks known as kimberlites.

Kimberlites can range from 10,000 to 2.1 billion years in age, and can have the deepest sources of any rocks on Earth's surface.

"Kimberlites in general inform us about conditions in the Earth's interior," said study lead author Gregory Yaxley, a geologist at Australian National University in Canberra. "Their geochemistry holds clues about the nature of the source rocks at these extreme depths."

Until now, kimberlites were found on every continent except Antarctica. Now, scientists have discovered these rocks on the southernmost continent.

Kimberlites on every continent

Researchers analyzed geological samples from boulders on the southeastern slopes of Mount Meredith, part of the vast Prince Charles mountain range in East Antarctica. The scientists found three kimberlite samples that were about 120 million years old; they formed around the time when the area that is now India was drifting away from the combined landmass of Australia and Antarctica. [Antarctica: Solving Geologic Mysteries (Video)]

The kimberlites lie near the margins of the Lambert rift, an enormous, transcontinental rift that crosses much of Antarctica.

"It is likely that this rift was critical to the formation of the kimberlite, as it may have been reactivated during separation of Australia and Antarctica from India," Yaxley told LiveScience's OurAmazingPlanet in an email. The presence of the kimberlite may, therefore, be "a direct manifestation of large, continent-scale tectonics."

The age of the Antarctic kimberlites and their chemical, mineral and physical features suggest they are part of a huge Cretaceous kimberlite province. This vast region is responsible for many of the world's diamonds, and is now apparently spread across most of the continents that were once part of the supercontinent Gondwana, Yaxley said.

Only about 1 to 2 percent of kimberlites contain valuable grades of diamond, Yaxley cautioned, and of these, most are "much, much less than 1 carat of diamond per ton of kimberlite," Yaxley said.

Establishing the viability of any clump of kimberlite as a potential diamond mine requires processing several tons of kimberlite to establish its grade, "and this is clearly unviable in the Antarctic environment," he wrote. "Additionally, mining activity is prohibited in Antarctica under the Madrid Protocol, to which 50 nations are signatories. So, this discovery will not lead to a diamond-mining industry in the southern continent, and this is how it should be."

Incidentally, although diamonds are often thought of as nature's hardest material, it turns out two other rare natural substances are harder — wurtzite boron nitride, which is formed during intense volcanic eruptions, and lonsdaleite, which is sometimes created when meteorites hit Earth.