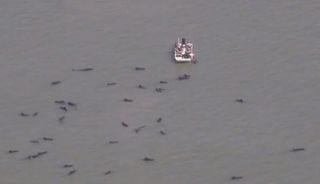 Rescuers attempted to herd a group of 41 pilot whales in Everglades National Park into deeper water on Dec. 4 but failed. Today (Dec. 5) they are headed to sea, a good sign, although 5 more are missing.
(Image: © Associated Press / YouTube)

A group of pilot whales that wandered into a remote part of Everglades National Park in South Florida is now heading back toward the sea, according to government officials.

Yesterday (Dec. 4), a group of 41 whales was found close to shore, in water as shallow as 3 feet (1 meter), which is dangerous for them — they are typically found in much deeper waters, said Blair Mase, a marine mammal specialist with the National Oceanic and Atmospheric Administration (NOAA) Fisheries service.

A total of 10 of the pilot whales were reported dead yesterday, and that number has now climbed to 11, Mase said today during a telephone news conference. There are also five whales missing; the individuals may have just separated from the group, or may be dead, she added.

But the move toward the sea, away from the Everglades, is encouraging, Mase said. "We are cautiously optimistic," she said during the call. Today, crews from NOAA and the National Park Service helped guide the whales toward the sea by placing their crafts between the shore and the whales. [Photos: Whales in Trouble off Everglades]

At 2:30 p.m. EST, when workers turned back to shore, the remaining 35 pilot whales were seen heading toward sea 6 miles (10 kilometers) from shore, in 16 feet (5 m) of water, Mase said. But the whales aren't yet in the clear, since they are out of their known home range and in shallower water than is typical, she added — they are usually found in water at least 100 feet (30 m) deep, and 15 miles (24 km) from shore.

Officials from NOAA are currently conducting necropsies on the stranded whales to determine the cause of death, although the results may not be available for weeks or months, Mase said.

The day's news is a turnaround from yesterday, when the whales didn't cooperate with workers and remained stalled near shore.

Of the 11 dead whales, seven were found already dead, and four had to be euthanized, according to news reports.

Pilot whales become stranded more than most other cetaceans. That's partially because they stick together in pods, and sometimes an entire group will follow a sick whale to shore and become stranded, researchers say. The fact that the group has left their dead compatriots behind is encouraging, Mase said.