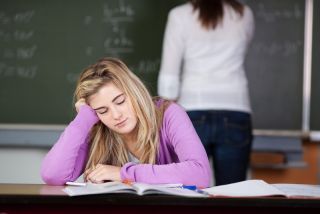 Teens' relationships with their parents and friends may affect how much sleep they get, a new study shows.
(Image: © Teen photo via Shutterstock)

Sleeping habits change when kids enter their teen years in part because of changing hormone levels. But a new study suggests that social ties, such as relationships with friends and parents, may play a bigger role than biology in influencing teen sleep.

Researchers analyzed information from nearly 1,000 adolescents, following them from age 12 to 15. The teens answered questions about all aspects of their lives, including their sleep habits, relationships with parents and friends, and involvement in school. Nurses also examined the teens each year of the study, to assess how quickly they were going through puberty.

During the study, teens' sleep decreased from 9.2 hour per night (on school nights) at age 12, to 7.8 hours per night at age 15. [10 Facts Every Parent Should Know About Their Teen's Brain]

Teens' social ties were much stronger predictors of changes in their sleep patterns than their stages of puberty, the researchers said.

The findings underscore the notion that, with regard to sleep habits, "teens' lives, in their totality, matters…not just the phase of puberty," they're going through, said study researcher David Maume, a sociology professor at the University of Cincinnati.

The study is one of the first to compare biological factors with social factors in terms of their effects on teen sleep.

One of the strongest predictors of sleep habits was social ties with parents, according to the study. Teens were more likely to get adequate sleep if their parents kept close tabs on their child's activities.

Teens generally slept for longer on school nights, and had fewer sleep disruptions, if their parents consistently set a bedtime. This might seem like common sense, but "maybe we need to be a reminder that parents matter in teens' lives," Maume said.

Sleep was also influenced by the teens' friends. Those whose friends strived to do well in school and act in socially positive ways had fewer sleep disruptions.

"These findings reinforce social science theory and research findings suggesting that health is facilitated by individuals becoming embedded in multiple networks of positive associations, with key actors in their lives," Maume wrote in the December issue of the Journal of Health and Social Behavior.

The researchers were not able to include information about what time teens were required to get to school, which likely affects sleep duration. The study also lacked information on how cell phone use affects sleep, but previous research suggests that teens sleep worse when they use technology, including cell phones, at night.