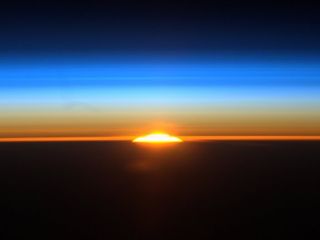 A tilt in the Earth's axis means significant changes in day length during the year for much of the world.
(Image: © Ron Garan)

At 2 a.m. on Sunday (Nov. 6), most of the United States will enjoy the upside to the annual daylight saving time shift — setting our clocks back by an hour.

But be careful how you enjoy it, cautions Dr. Anita Valanju Shelgikar, director of the sleep medicine fellowship program at the University of Michigan.

The arrival of winter presents a more difficult transition than the shift back, since, as the days shorten, a gap widens between our internal body clocks and the natural day, she said. This becomes more of an issue farther north, since days become even shorter.

Why turn back the clock?

Daylight saving time, which is now ending, is an attempt to take advantage of the annual fluctuation in the amount of time we see the sun above the horizon. This fluctuation happens because the axis around which the Earth rotates doesn't stand straight relative to the sun, rather our planet is tilted 23.5 degrees.

This means that as the Earth travels around the sun on its annual course, one hemisphere is tilted toward the sun, getting more than its fair share of light and warmth, while the other is titled away and enduring winter.

This effect becomes stronger as you travel farther north or south away from the equator, so that summer at either pole means 24-hour sunlight, and winter means 24-hour darkness. The continental U.S. experiences a less extreme fluctuation in day length over the course of the year.

Daylight saving time is an attempt to deal with this situation, by shifting the national schedule forward an hour in March to take advantage of lengthening daylight hours, and back again in November as daylight shrinks. The idea was first suggested by Benjamin Franklin in 1874.

Light is the most important environmental cue that tells our brains to wake up in the morning, so darkness in the morning makes it hard to get out of bed, Shelgikar said.

She recommends exposing your eyes to light right when you get up. While natural light is probably the best cue, artificial light in your bedroom can still help, she said.

A routine also helps. Shelgikar also recommends sticking to a set sleep schedule, with a fixed bedtime and a fixed wake time.