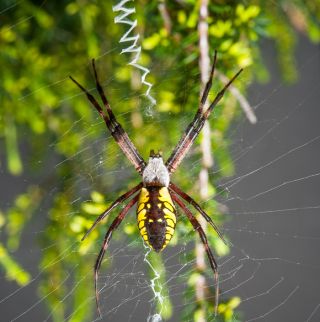 Known for their colorful, intricately patterned abdomens, garden spiders are the common name for the genus Argiope, which means “with a bright face” in Latin. There are dozens of species within this genus, but the most common members found in North America are the yellow and black, banded and silver varieties.

“As their common name suggests, they are found in gardens,” said Jo-Anne Nina Sewlal, an arachnologist at the University of the West Indies in Trinidad. “But they are usually [a] generalist species in terms of the habitats they occupy and are not restricted to gardens.” In North America, they are found in southern Canada, the continental United States, and as far south as Costa Rica. They rarely venture inside human dwellings. These non-aggressive spiders’ bites are not harmful to humans.

Garden spiders typically live for about one year, according to the National Wildlife Federation. After mating in the fall, the females eat the males then die soon after. Spiderlings hatch in the spring.

Garden spiders are a genus in the family Araneidae, known as orb-weaver spiders. According to Sewlal, orb weavers’ “web design is the one we most associate with spiders and are seen in storybooks and at Halloween.” These spiders are the creators of delicate, circular, spoked webs. “The web consists of a series of concentric circles starting from the smallest at the center, referred to as the hub of the web, and radiating outwards where the circles get larger and larger,” said Sewlal. “These circles are divided into sectors by lines of silk so that it resembles slices of a pie.” Sometimes, they cluster heavy streams of silk in a zigzag pattern near the center of the web, which is called a stabilimentum.

According to the University of Michigan’s BioKIDS website, most orb-weaver spiders spin a beautiful new web each night after eating the remnants of the old web.

“There are actually two different types of silk used in web construction,” said Sewlal.  “When the web is being constructed, the spider lays out very thin lines of non-sticky silk when it is making the concentric circles, or radii, and uses this to keep the tension of the web. After the sticky lines of silk are placed, this non-sticky silk is cut away.”

Flying insects such as flies, bees, grasshoppers, and others get stuck in the stinky silk. According to the University of Idaho Extension’s Homeowner Guide to Spiders Around the Home and Yard, garden spiders often sit in the center of the web, and when an insect gets stuck, they quickly wrap the prey in silk and bite it, causing the prey to go still.

Garden spiders will spin webs in plants, in porch overhangs, between trees, and in other outdoor spots.

According to the Integrated Taxonomic Information System (ITIS), the taxonomy of garden orb-weaver spiders is:

These are among the most common species:

The species Argiope aurantia has several common names, including black and yellow garden spider, corn spider, writing spider and zipper spider, according to North Carolina State University Cooperative Extension. In Latin, aurantia means “overlaid with gold” — a fitting description for this vibrant spider. “They are quite colorful,” said Sewlal, “with a prominent oval abdomen covered in a black and yellow pattern, hence their common name.” Their abdomen is patterned on top with three-to-four bold black and yellow spots and stripes and, on the bottom, mottled black with two vertical yellow stripes. The University of Michigan Museum of Zoology’s Animal Diversity Web (ADW) noted that this spider’s celothorax (smaller, front section of the body) is covered with shiny silver hairs. Its eight eyes are arranged in a trapezoid pattern. Females have yellowish or reddish legs at the base that fade to black. Males have brown legs with faded black bands. Young spiders’ legs are entirely banded.

According to Fairfax County Public Schools, female spiders are larger than males, growing up to a 1.5 inches (4 centimeters) long. Males are typically three-quarters of an inch (almost 2 cm) long. And Sewlal said that black and yellow garden spiders can make their bodies look even larger: “When disturbed, they will hold onto the web and vibrate it to appear bigger. However, if this fails then they will drop to the ground.”

These spiders can spin truly large webs; the Missouri Department of Conservation stated that they can stretch up to 2 feet in diameter. Sewlal pointed out that these spiders’ stabilimentum — the zigzagging silk line in the web — "is located vertically through the center of the web."

Argiope argentata, also known as the silver garden spider, has a primarily shiny silver body with brown or orange coloration on the back of its abdomen and brown tones on its underside, according to the San Diego Natural History Museum Field Guide. Its legs are banded in silver, black, and orange colors. Like other garden spiders, females are significantly larger than males. “Their body shape makes them resemble a drop of water clinging to the underside of the web,” said Sewlal, “hence their common name of ‘dew-drop spiders.’”

The silver garden spider lives in warmer regions of North America, such as California and Florida, and is even sometimes found in Argentina. According to the Biology department at the University of California, Irvine, it is often spotted on prickly pear cacti during the autumn months.

The silver garden spider’s web is especially likely to have a heavy zigzag pattern, called the stabilimenta. According to Sewlal, this is their most defining characteristic. “This species arrange the silk in a zigzag pattern to form a wide thick line. These wide and thick lines are then placed in an X-shape with the middle passing through the hub,” she said.

“The actual use of this is controversial,” said Sewlal. Arachnologists have two primary theories about it: “The first is that it attracts prey since it reflects light so that insects are tricked to believe that they are flying towards a gap in the vegetation. The second theory is that it alerts predators like birds that the web is there so that they do not fly into it and destroy it.”

Agriope trifasciata is the most common garden spider in the Western United States, according to the Colorado State University Cooperative Extension Entomology department, though they live all over the country. “Probably their most defining physical characteristic is their body coloration,” said Sewlal. “Their oval abdomen is mostly white with bands of yellow and black, hence their common name.” These spiders have abdomens that are pointed near the rear and covered in small stripes. The female is significantly larger than the male.

Sewlal mentioned that arachnologists have found that banded garden spiders almost always “orient their webs along an east-to-west axis but place themselves in the webs with their abdomens facing south.” This position helps them absorb as much of the sun’s heat as possible. “Temperature is one of the major factors [for] spiders, especially for them to be active late in the year,” said Sewlal.